Doctor Who special to simulcast globally

The upcoming fiftieth anniversary episode of British sci-fi series Doctor Who will launch with a global simulcast to more than 75 territories in November. 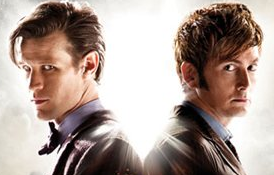 One-off special The Day of the Doctor (pictured) will go out globally on November 23 at the same time as the UK launch on BBC One, the pubcaster’s commercial arm BBC Worldwide has announced.

Channels set to broadcast it are: Fox in Germany, YLE in Finland, Karousel in Russia, BBC America, Space in Canada and ABC in Australia.

BBC Entertainment channels in Poland, Africa, Asia and Latin America will also launch it, along with the BBC HD channel in Latin America.

The Doctor Who franchise turns 50 in November and has enjoyed a surge of popularity after relaunching in the UK in 2005.

“Few TV shows can still lay claim to being appointment viewing but Doctor Who takes this to another level. In its fiftieth anniversary year we wanted to create a truly international event for Doctor Who fans in as many countries as possible and the simultaneous broadcast and cinema screening of the special across so many countries will make for a fitting birthday tribute to our Time Lord,” said BBCWW CEO Tim Davie.

Besides the TV broadcasts, hundreds of cinemas in the UK and worldwide will offer the episode in 3D, with details of ticket availability forthcoming. UK viewers will 3D TV sets will be able to access the 3D programme through the BBC HD Red Button service.