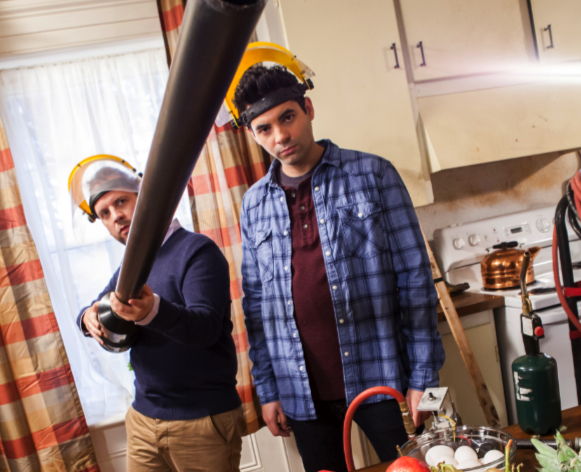 MTG Studios-owned UK distributor DRG has sold the Canadian remake of an NRK comic science-themed factual series back to the Norwegian public broadcaster.

Never Ever Do This at Home pairs a scientist and a comedian and tasks them with finding out what happens when household products’ warning labels are ignored, while explaining the science behind the subsequent reactions.

The show began life as a 4x30mins in-house series on NRK before DRG sold it as a format to Discovery Channel in Canada. That version (pictured), which Insight TV reworked into 13x30mins format, is now heading back to Norway following a new deal.

“The whole thing has come full circle and there is something wonderful about seeing an idea remade in different countries end up imported back into the country from where it came,” DRG’s managing director, acquisitions and formats, Andrea Jackson told TBI.

“It’s something familiar for NRK viewers and, of course, NRK can be very proud of how it has done around the world,” she added.

DRG has employed the same circular sales method, which Jackson termed as a “cross-pollination” of rights exploitation, on series such as Don’t Tell the Bride, which began life as a successful BBC3 series in the UK before US and Irish remakes were sold back to the BBC.

The news comes soon after DRG completed its first raft of sales since MTG Studios paid £15 million (US$22.5 million) for the business, including selling Never Ever… into Sweden as a format for TV4. Earlier this month, TBI revealed formats from MTG’s distribution division, Strix Internatonal, would be folded into DRG, with the SI brand dropped as a result.