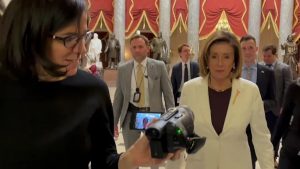 Pelosi In The House

HBO follows ‘Pelosi In The House’

HBO will debut Pelosi In The House, a documentary about Speaker of the United States House of Representatives, Nancy Pelosi, produced and directed by her daughter Alexandra.

In what is her 14th documentary for HBO, Alexandra Pelosi explores her mother’s career milestones leading up to the inauguration of President Joseph Biden in January 2021.

The film will debut on HBO on 13 December and be available to stream on HBO Max and goes behind the headlines as it tracks Pelosi’s life in public office from her election to Congress in 1987 and becoming the first female Speaker of the House in 2007 through the 2020 election and President Biden’s inauguration.

Following Pelosi at both work and home in real time during consequential political moments in the country’s recent history, the film offers a unique look at American politics through her efforts on the Affordable Care Act, the COVID-19 relief package, two impeachments as well as a record of the events of the attack on the US Capitol on 6 January, 2021, following Pelosi and other lawmakers at a secure location as the crisis unfolded.

BBC Two in the UK and PBS in the US have commissioned a three-part series from BBC Studios exploring the rise and fall of disco music.

Disco Inferno: The Sound Of The Underground (working title) will celebrate the continuing musical and cultural legacy of disco, told by the original musicians, promoters and innovators – as well as modern day musical icons.

The series will also bring the overlooked pioneers together to tell a new revisionist history of the disco age and how their experience speaks to the big issues of today: Black Lives Matter, LGBTQ+ identity and female empowerment.

Jonathan Rothery, commissioning editor for the BBC, said: “There’s no doubt that disco had an enormous impact – not just on the musical landscape at the time of its emergence and far beyond, but as a social and cultural force for change.

“This documentary series from BBC Studios, which the BBC has supported together with PBS, will highlight many new or untold stories of the genre. I’m looking forward to sharing Disco Inferno with audiences on BBC Two.”