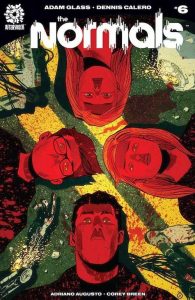 SBS in Australia has agreed a deal to option AfterShock Comics’ title The Normals via prodco Werner Films.

The Normals is centered around one man who finds out his perfect life and family may all be an illusion, setting him on a crusade to save what he believes is real and loves with all his being, while having to save the world in the process as forces seek to destroy him.

Estonia’s TV3 is preparing to launch the latest adaptation of Can’t Stop Media’s The Secret Song, marking its seventh iteration.

The shiow, which debuts Sunday 4 December, in primetime will be known as Salalaul and is being produced by Ruut, which has previously been behind local remakes of Idol, Your Face Sounds Familiar and Guess My Age.

The format follows local celebrities as they watch other artists, friends or family surprise them with a new take of one of their own favourite songs. In France, the show has been renewed by TF1 for a sixth consecutive year.

WildBrain has partnered with Ukrainian kids’ producer Glowberry to take the Brave Bunnies preschool brand into its portfolio of kids’ and family franchises.

Under the arrangement, WildBrain has assured the continuation of the popular Brave Bunnies series, which was disrupted by the Russian invasion of Ukraine.

The firm will work with Glowberry and Ibero-American animation studio, Ánima, to lead the global management of Brave Bunnies. The show was created by Olga Cherepanova, co-founder of Glowberry and creative producer on the series.