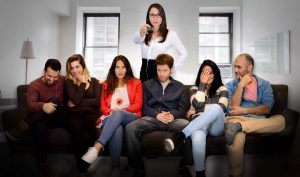 Discovery+ in Germany is preparing to launch a local celebrity version of the social experiment format Sex Tape.

The show, from ITV Studios-owned Armoza Formats, has been produced by Imago TV Film and is to be hosted by Natascha Ochsenknecht.

The format follows couples as they try to fix their relationships by having their love life analysed over the course of a week. They will then meet the other couples, and under the guidance of a top sex therapist, will reveal their uncensored tapes to each other in a bid to eradicate issues.

The German version will follow the sex lives of 12 celebrity couples, including entertainer Julian FM Stoeckel and his partner Marcell, as well as tattoo model and reality TV star Kate Merlan and her husband, soccer player Jakub Jarecki.

The format has already been remade in Italy for Discovery+, while a Finnish adaptation also streamed on the Warner Bros. Discovery-owned streamer.