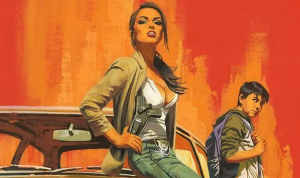 Blumhouse Television in the US has acquired the rights to adapt the Stephen King novel Later into a limited series, with Lucy Liu attached to star.

Raelle Tucker (True Blood) is serving as series creator and has written the pilot script.

Released last year, the original novel tells the story of literary agent and struggling single mother Tia, whose son Jamie has an incredible ability to communicate with the dead.

While Tia fights to keep Jamie safe, a New York detective works out what the boy can do and draws him into the chase for a killer that has threatened to strike from beyond the grave.

Tucker is best known for her Emmy nominated work on HBO’s True Blood and has previously teamed with Jason Blum’s Blumhouse Television on the anthology series Sacred Lies and Sacred Lies: The Singing Bones. Blum will exec produce, alongside Chris McCumber and Jeremy Gold.

Blumhouse is also producing an upcoming adaptation of the King story Mr Harrigan’s Phone for Netflix.

“I’ve wanted to work with Jason Blum for years, and now we have two projects together. Go, me!” said King, according to Deadline, which first reported the adaptation.

“I’ve wanted to work with Stephen King since before I was born, which sounds impossible until you remember that it’s Stephen King,” said Blum.

“Later is terrifying and touching and wonderfully weird — of course it is, it’s Stephen King. Adapting one of my favorite writers of all time, with an incredible partner like Blumhouse and the incomparable Lucy Liu, is a dream come true,” added Tucker.