Investment in UK studio space has soared over the past three years with more than £785m ($1.04bn) to be spent on new sites, with an 85,000 square meter development near London the latest to be given the greenlight.

According to the newly released Screen Business report from the British Film Institute (BFI), £785.4m has been allocated to be spent on sites which received planning permission between 2017 and 2020.

This is in addition to a further £131.6m that has already been spent on building or expanding UK studios between 2017 and 2019, reflecting the surging production spend across the industry (see more of that below).

Streamers have, in particular, led the charge for more production space in the UK and numerous sites are now in the works, ranging from Sky Studios’ Elstree operation and the expanding Pinewood Studios, to Belfast’s Harbour Studios and First Stage Studios in Scotland.

Another site to have started construction is Blackhall Global Partners-owned Shinfield Studios, which has  confirmed today it has secured full planning permission to begin construction.

The site, located in Berkshire, will eventually comprise 18 sound stages across the 85,000 square meter site, which will be located within the Thames Valley Science Park.

Four sound stages have already been completed, following accelerated planning permission, with an as-yet undisclosed Disney show confirmed to start production there in 2022.

Nine further stages will then open in 2023, with completion of the entire 18-stage facility set to be completed by the end of 2024.

Once complete, Shinfield Studios said it expects to generate inward investment of £600m. The site will also house workshops, offices and a post-production/screening facility, along with facilities for lighting, camera and props businesses.

The UK’s expanding studio ecosystem follows three years of substantial growth across many areas of the country’s production industry, as detailed by the BFI’s Screen Business report released today.

It details spending on screen production including video games from 2017 to 2019 and in particular highlights the effect of government-backed tax relief schemes, with a total of £13.48bn returned to the UK economy over that period. 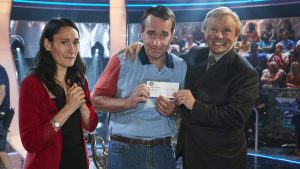 It also contrasts the spend of £392.8m on TV in 2013, the year in which the High End Tax Relief was introduced.

Much of the spending in recent years has come from overseas buyers, with £482.4m contributed by domestic UK productions in 2019 and just under £1.60bn – 76.8% of the total – by inward investment and co-production spend.

Combined spend on film and HETV production in the UK in the first half of 2021, meanwhile, was £3.6bn, the highest ever total reported in the quarterly official statistics. That number is expected to rise to around $5bn by the year’s end.

Despite the decline, it is still almost double the £43.4m spend in 2015, the year that the Children’s Tax Relief was introduced.

Animation also suffered: programme production supported by tax reliefs declined to £65.3m in 2019, down from £84.5m in 2018. It was also down from the £79.9m recorded in 2013, the year in which the Animation Tax Relief was introduced.