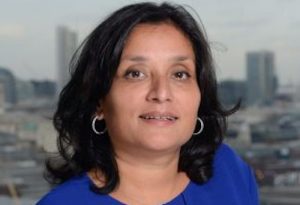 ITV Studios (ITVS) has named Angela Jain to a new UK-focused role heading up unscripted, with a remit to oversee operations across 11 of the company’s prodcos.

Jain, who is currently MD at ITVS-owned Lifted Entertainment, will become director of unscripted in the UK from January and will have responsibility for UK unscripted labels Potato, Possessed, Rollercoaster Television, Boom and Multistory Media.

She will also oversee Twofour, 12 Yard Productions, The Garden, So Television and Oxford Scientific Films, as well as her current firm Lifted Entertainment, which was rebranded from ITV Studios Entertainment earlier this year. ITVS said a successor will be named in due course.

Jain will work across shows ranging from Love Island, The Chase and I’m A Celebrity…..Get Me out of Here, to The Cabins, Walk The Line and Moneyball.

She will have overall P&L responsibility for the UK unscripted group, with the MDs of the 11 unscripted UK labels reporting directly to her.

Jain will report to Julian Bellamy, MD of ITVS. The group’s UK scripted labels and ITV Studios Daytime will continue to report directly to Bellamy.

Bellamy said: “Angela’s vast amount of experience, leadership qualities and knowledge make her the perfect person to be named as our first director of unscripted in the UK.”

Jain added: “I am looking forward to working more closely with the UK studios management team and Julian to maximise every opportunity.

“Even though I’m not going far, I do leave behind an incredible, kind and hardworking team at Lifted Entertainment. We have had the best of times and some difficult times too, but I will remember my time at Lifted Entertainment with great fondness because it was so creatively rewarding, interesting and fun.”