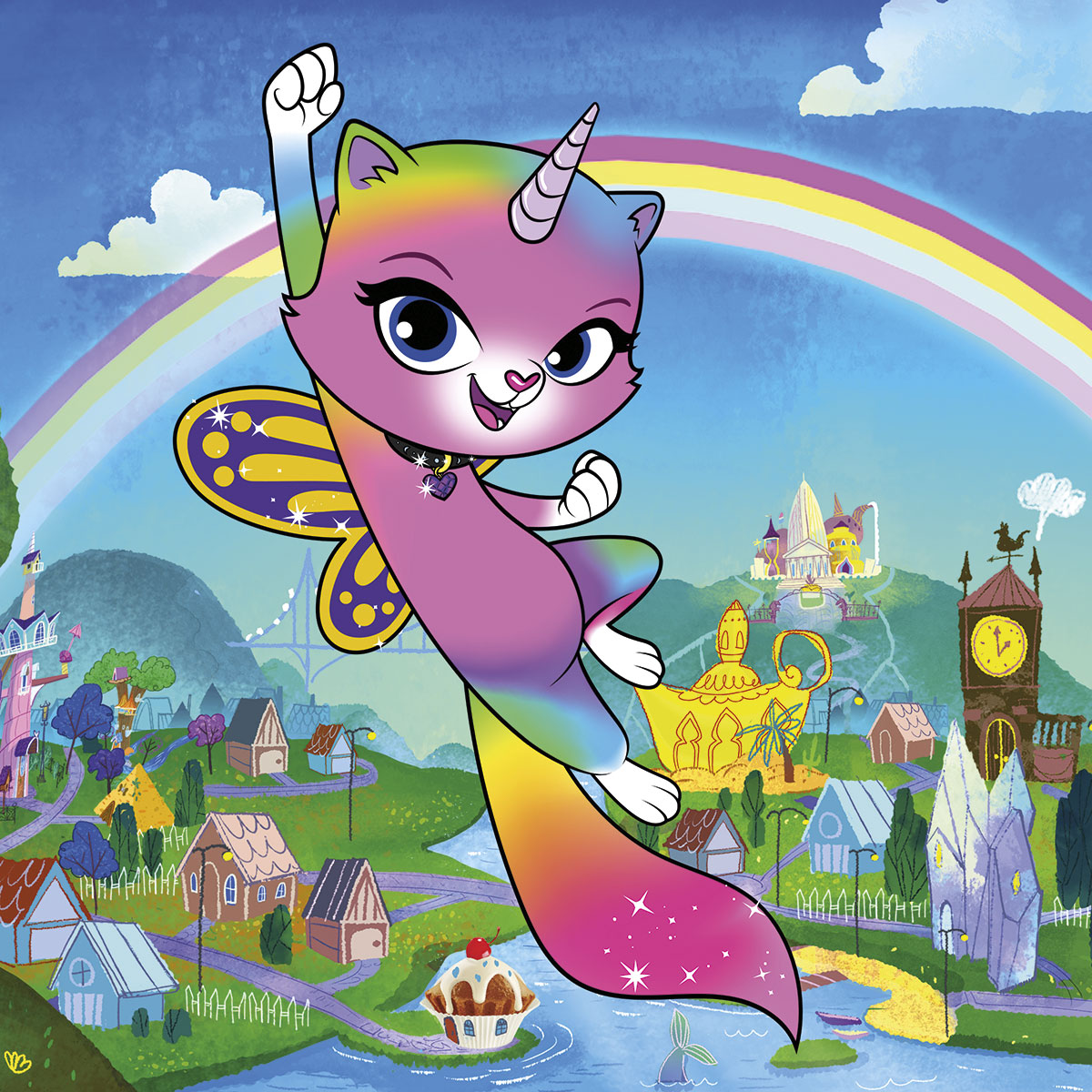 Kids have been the most ardent adopters of the OTT wave, with younger viewers in many territories now watching rapidly decreasing amounts of traditional linear TV. For distributors, the implications are clear but opportunities are emerging

Market consolidation and the ongoing rise of SVOD services are among the biggest disruptors to the distribution of kids programming, but there remains optimism that sales outfits can continue to prosper.

Almost 80% of respondents said they had noticed more demand for kids shows from SVOD and AVOD buyers, with budgets also ticking upwards. Just over 21% said budgets had risen in this part of the market by more than 25% over the past 12 months and a further 29% said they had noticed budgets increasing by more than 10%, with 35% reporting that budgets had remained the same. 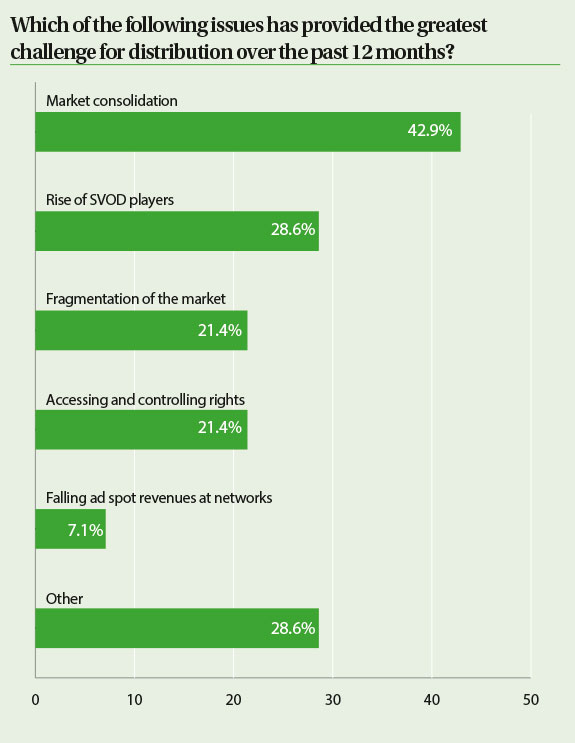 But while demand for programming is up, so are the SVODs’ demands for global rights, with almost 80% of respondents reporting that internationally facing OTT services wanted such rights packages when acquiring. There was an even split on whether these global deals are a positive development for distributors or not.

And while the interest and appetite for on demand viewing from kids appears unstoppable, it is continuing to have major repercussions on the distribution side of the market, with buyers wanting to be able to secure all manner of rights for their audiences.

“It impacts the market by making it challenging to satisfy the needs of your customer if you don’t have all the rights,” says Dominic Gardiner, CEO at Jetpack Distribution. “It can create more friction. It’s not the perfect solution. Sometimes the deal terms are compromised. When a producer retains YouTube rights, for example, it might not be acceptable to a broadcaster in a given market.”

Indeed, for some, the windowing system is becoming increasingly complex, while for others, it is an increasingly fraught business, with the opportunities to sell myriad rights to different buyers drying up all together.

“The ‘traditional’ model is disappearing little by little,” says Monica Levy, head of international at France’s Federation Kids and Family. “The ‘windowing’ – selling to multiple platforms with different license dates, a practice that distributors enjoyed for many years – is now nearing its end as all players want VOD rights.”

These concerns are reflected in the fact that more than 40% of respondents stated that rights ownership was among their most pressing concerns. Financing and investment was an even greater issue, respondents said, with almost 60% believing this aspect of the business was most pressing.

The other major factor affecting kids distribution is consolidation, something that almost 80% of respondents said they expected to see more of. “I expect we will see more acquisitions like the Hasbro-Entertainment One purchase as well as more broadcast consolidation,” says Caroline Tyre, SVP of international sales and head of Genius Brands Network. “This introduces even more powerful players in to the marketplace, which often can lead to bigger output deals and more competitive slots.”

For Claudia Scott Hansen, SVP of global distribution at The Jim Henson Company, the M&A activity affecting children’s TV has had – and will continue to have – lasting implications on the distribution business.

“There is a cataclysmic shift in how companies are operating with all of the consolidation in the past 18 months,” she says. “This has been seen through content acquisitions as joined companies evaluate the ‘union’ of libraries and through evolving priorities from new management and strategies. 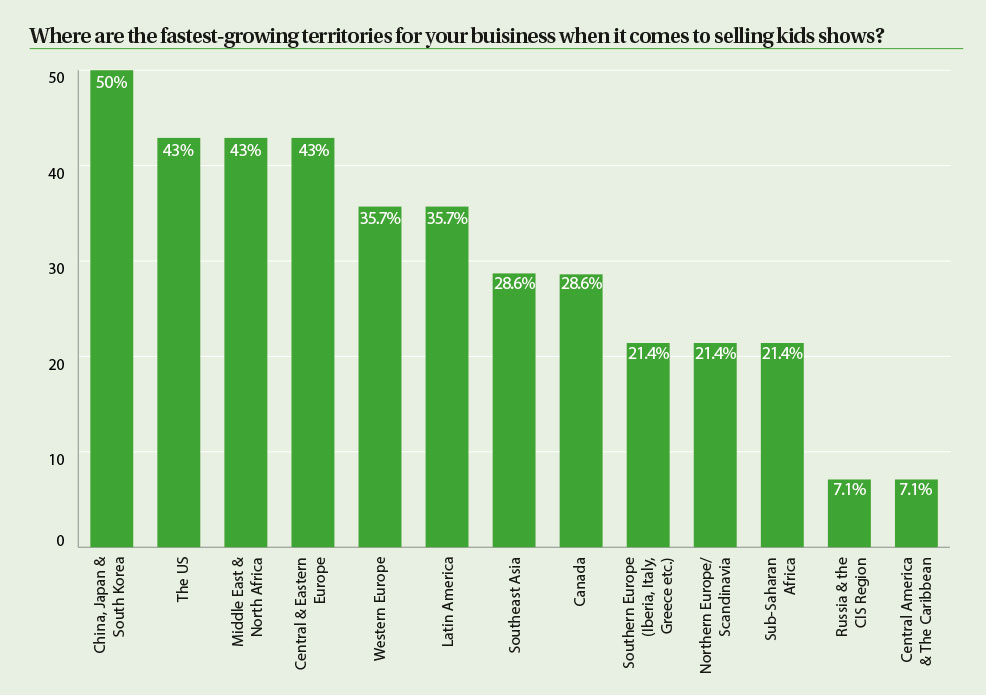 Clearly this is having ramifications for distributors, but more than 90% of respondents said they expected their businesses to improve in the next 12 months. There was however less certainty about the market as a whole, with only 65% of respondents believing the wider industry would improve.

Central and Eastern Europe emerged, again, as one of the fastest growing regions when it comes to selling kids product, with Middle East and North Africa also a major draw. Established markets such as the US were also cited as fast-growers, but it was China, Japan and South Korea that secured most votes, with 50% of respondents picking out those three countries as being among their fastest growing. Amidst the consolidation of companies in the West and broader SVOD growth around the world, the People’s Republic continues to offer opportunities in a fast-changing, challenging but growing market.