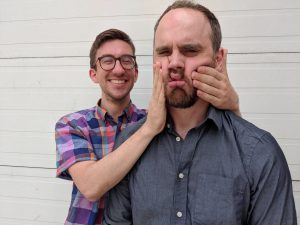 Cavendish is a new half-hour primetime original comedy series set to premiere on Canada’s public service broadcaster CBC in the winter of 2019.

Created by leading Canadian comedians Andrew Bush and Mark Little (who will also executive produce, and show-run the series) the eight-episode series is about bickering brothers Andy and Mark (played by Bush and Little, respectively) who haven’t been to their hometown of Cavendish since their parents split up more than 30 years ago.

Now, for the first time since childhood, they are returning to take care of their ailing father, they find that Cavendish is not quite inline with their fond memories of childhood. There may or may not be a “beast” that roams the surrounding woods, as well as possessed statues, dark covens and unbreakable family curses.

Sibling rivalry and jealousy form a lot of the conflict and comedy, as do the other ‘challenging’ relationships such as those with their father, Rollie, a grumbling malcontent who runs a museum of the fantastic and a morose teenage niece.

Sally Catto, general manager of programming at CBC, says of Cavendish; “ Fundamentally, it’s about family – taking a deeper look at the layered and complex relationships between the brothers and their father. The series showcases a part of Canada that we haven’t yet explored through comedy.”

The eight-episode series is Temple Street’s first comedy series with CBC, and follows the company’s previous one-hour dramas X Company and Being Erica for the Canadian public broadcaster.

Temple Street (the premium scripted division of Boat Rocker Studios) has earnt a global reputation for the quality of its programming that includes series such as Orphan Black (BBC America, Space) and Queer as Folk (Showtime, Showcase) which they hope Cavendish will reinforce.

Pre-production is due to start in July, with principal photography – shot on location in Nova Scotia and Prince Edward Island – later this summer.