UK-based Content Research Company recently updated its VOD Directory, a guide that provides analysis on more than OTT services in nearly 200 territories. Here, advisor John Morris offers exclusive new insight into those driving the on-demand market, the models they’re using, and how these vary by geography and genre

Three years after The VOD Directory first launched, its data shows the number of VOD services significantly spiking in three distinct years: 2007, 2011 and 2016. It’s likely these spurts were underpinned by technical innovations.

Until 2007, Netflix subscribers ordered DVDs online, which were then sent out by post. In January 2007, the company offered customers the chance to stream 1,000 (of their 70,000) film titles online for the first time. VOD streaming had existed previously, but slow download speeds had produced interminable buffering and made it unattractive for consumers.

Netflix used their own version of a technology (HTTP adaptive streaming) developed by others, which overcame these issues and prompted its 2007 VOD launch, which in turn became one of a clutch of other streaming services.

In the second peak year, 2011, the industry was about to agree a new standard for improving the picture and sound quality of VOD-carried content and in 2016 better broadband services and uptake of connected devices such as smart TVs led to a third spike.

Sliced another way, the data gives insight into how multi-system operators (MSOs), the pre-VOD suppliers of paid-for linear content to the home, reacted when the pure-OTT platforms appeared.

While both MSO-owned and pure OTT service launches peaked in key years of technical advance, MSO VOD lagged behind, and was launched in smaller numbers, than its pure-OTT rivals.

This is not surprising, since MSO businesses were based on their own cable, satellite, or fibre delivery networks, and TV was only one part of a multi-play deal for consumers that leveraged operators’ fixed assets (their delivery and customer management systems). 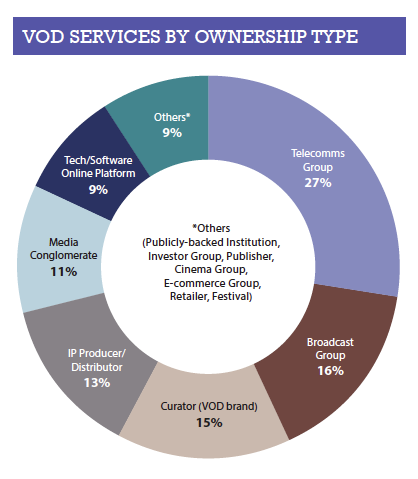 At the same time, these multi-play deals bound MSO customers to twelve month-plus subscription contracts – based mainly on a pay TV model rather than VOD.

Pure OTT operators, free of legacy network investments and with no expensive long-standing content supply deals, could offer monthly SVOD or no-contract transactional VOD as their business model from the start, providing consumers with a much more flexible and cost-effective alternative. As a result, millions cut the cord.

Subsequently MSOs have fought back by launching their own VOD services to deal with the flexibility challenge, and leveraged their ability to outbid OTT services for high-value rights (mainly sports and premium first-run movies) to stem the flow of cord cutters.

Counter-intuitively, some MSOs also now offer pure OTT services themselves such as Sky’s Now TV service to leverage their investment in rights and to keep customers loyal to the overall brand, even if they do cord cut. The lag of MSO VOD behind OTT is therefore explained by a legacy business having to react to a start-up challenge.

Numerically, most VOD services around the world are pure or primarily OTT as opposed to MSO-distributed, with the US, UK, Germany and France leading (in the US, 96% of VOD services are OTT).
The only region to buck this trend is Central and Eastern Europe, where 60% are MSO-distributed services.

There may be various explanations for this, including that the MSOs learned from the experience of more developed markets and (re)acted more quickly. Or it could be that consumer inertia may have been stronger, or there may be a less favourable entrepreneurial or regulatory environment in this region.

The ownership of VOD services around the world is almost evenly split between the traditional providers of TV to the home (studios, telcos, and media conglomerates) and a host of new entrants, who have benefitted from the lower costs of entry to market.

The economics of OTT VOD has also made it possible for public bodies, educational institutions, and publishers to launch their own services. Those to have done so include the Argentinian Institute of Cinema and Audiovisual Arts (CINE.AR Play), British Film Institute (BFI Player), Houghton Mifflin Harcourt (Curious World) and Axel Springer (One Net). 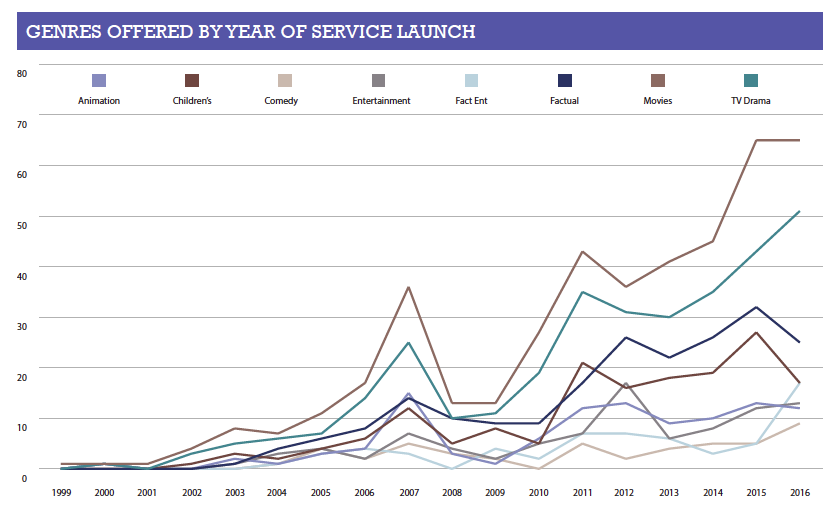 Subscription VOD is the dominant type of service across all territories and genres, and a large proportion of these suppliers also offer TVOD too. Advertiser-funded VOD and free VOD are the least common forms of business model, though there are some regional and genre variations.

This is probably because almost all of VOD in North America is OTT compared with 28% in Western Europe, where MSO-owned VOD dominates, and that European MSOs are in a better position to obtain and exploit sell-through rights due to their historic rights contracts and existing technical and customer-management infrastructure.

Free VOD, the least common type, tends to be offered by publicly-backed services such as the BBC iPlayer in the UK, or within a fremium model where simple sign-up gives access to a limited library (as a sample or loss leader), with the full inventory made available for payment of a subscription or one-off purchase fee.

There are also patterns by genre. Factual, comedy and factual entertainment are more likely to be offered as AVOD or FVOD than are movies or drama, pointing to consumer perceptions regarding value by content type. 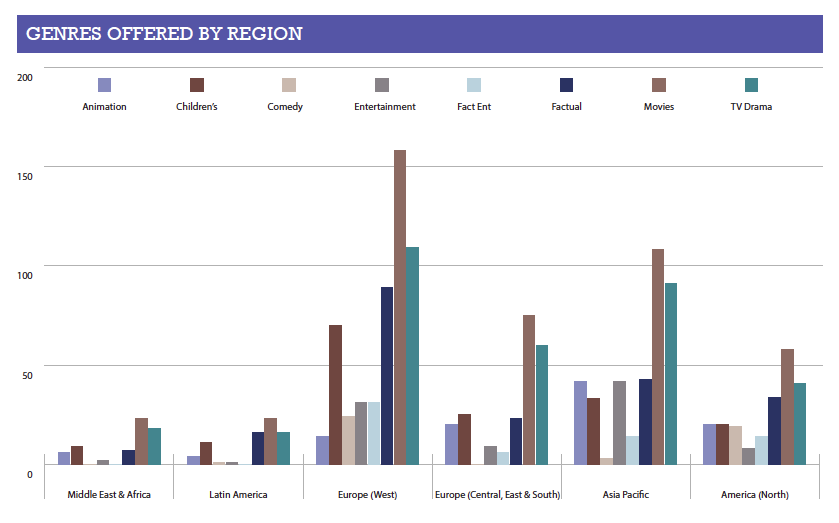 Concentrations of services are also found in certain regions with a common or similar language, including German-speaking territories which has 9% of all services worldwide. The Nordic countries, which have providers such as Viaplay that tend to buy content centrally, contains 6% of the total.

Similarly, Spanish-speaking Latin America, where services normally cover more than one country in the region, has 34 providers.

VOD’s programming backbone has always been movies, which have dominated since VOD pioneer Cinema Now’s 1999 launch. Three-quarters of all VOD services offer movies, and over half carry TV drama.

As a reflection of consumer preferences this clearly points to the relative value of certain genres above others. The studios and other owners of movie libraries and drama inventories have been the biggest gainers as VOD has developed, although they have also been faced with the dilemma of whether to license to third party VOD services or launch their own. Many have moved to the latter position as Disney’s planned service and withdrawal of content from Netflix illustrates.

Geographically, Asia Pacific leads in entertainment and animation as a proportion of all genres offered on VOD in a region, while factual makes up a larger share of genres offered in North America (especially Canada), and Western Europe (especially the UK).

German-speaking territories and the Nordics have the largest number of children’s VOD services and the former also ranks highest in factual with 26 offers. 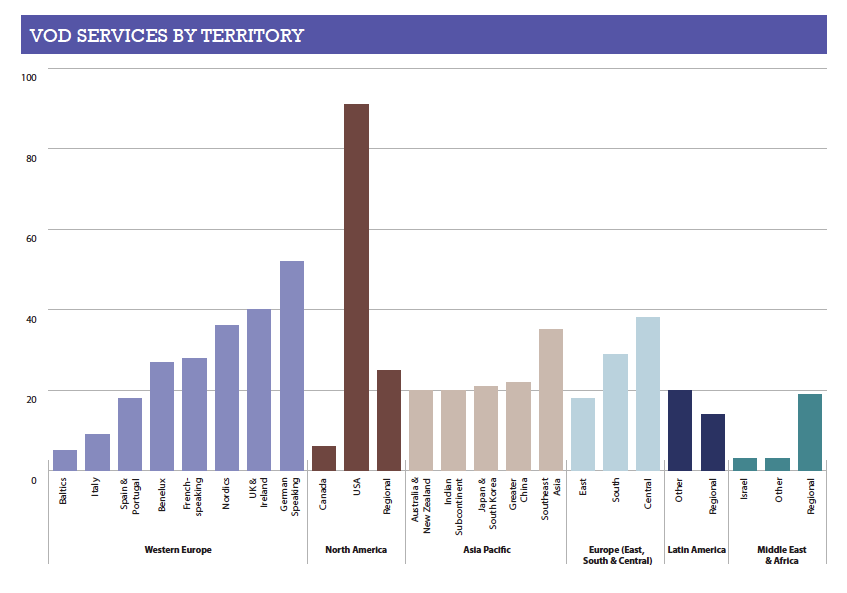 Further insights into this high-growth business, unlocked by data in the VOD Directory, are available from Content Research Company.