With executives brushing away the New Year cobwebs and getting back to the business of making and selling television, TBI has teamed up with Parrot Analytics to bring you the most in-demand programmes across Europe last year.

The exclusive data brings into focus the new shows, perennial favourites, and those beginning to fade from the spotlight. The stats cover six territories across Europe (the UK included, for now) and the months of January through to mid-December… 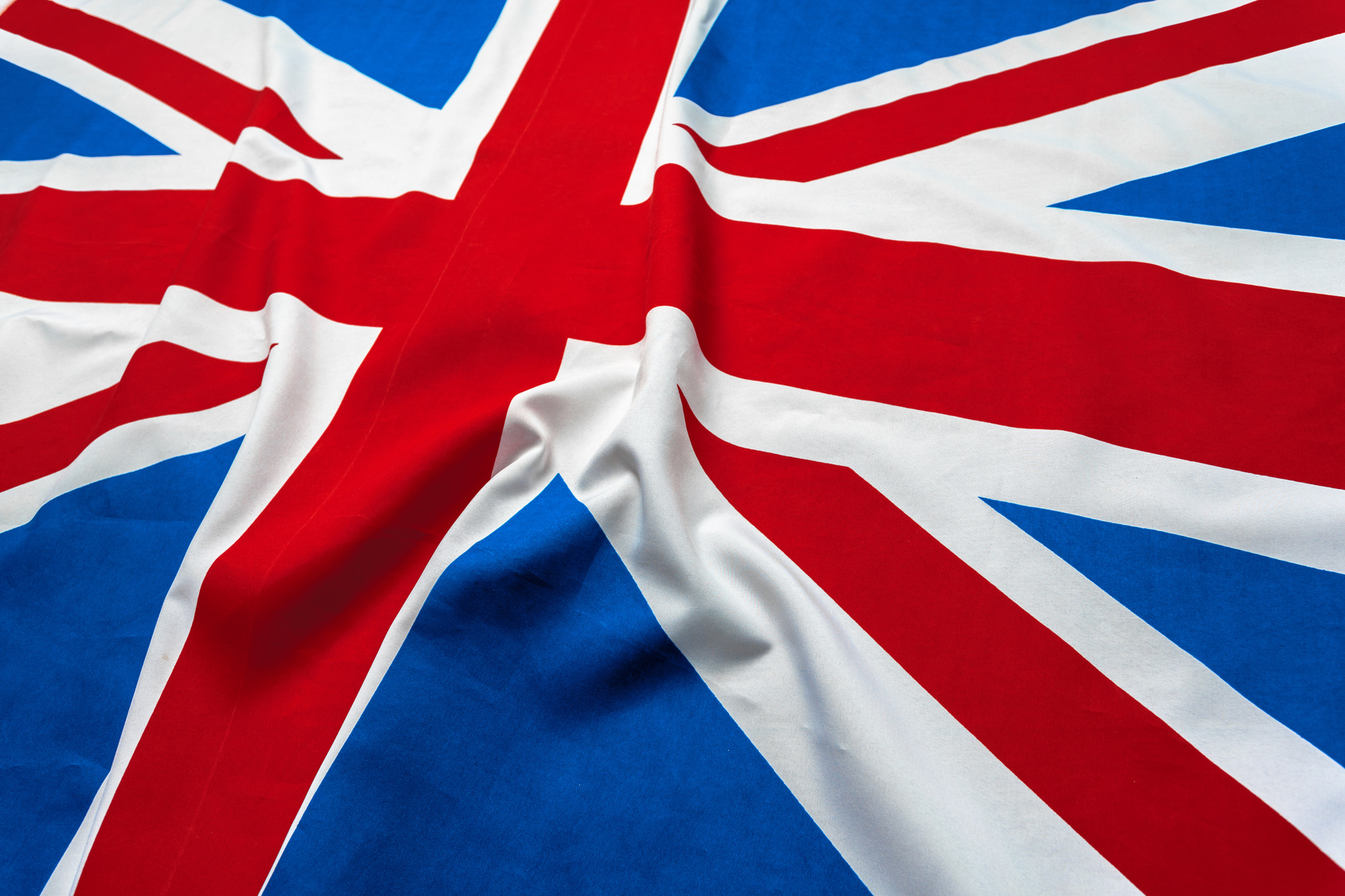 Dark fantasy themes were flavour of the moment in the UK, which experienced one of the most politically turbulent years of its existence – though whether the two concepts are linked is questionable. 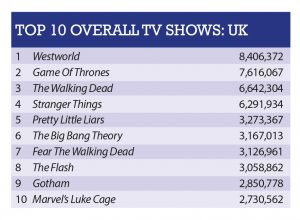 The news will be a tonic for commissioning US broadcaster HBO, which also provided the UK’s second-most demanded overall series, Game of Thrones (also on Sky Atlantic).

The Walking Dead, which along with Game of Thrones perhaps had the most column inches dedicated to it, was third, followed by leading digital series Stranger Things. 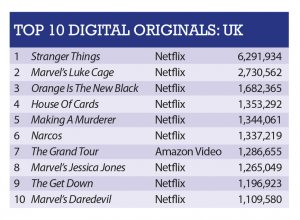 This was despite its former Top Gear presenting trio Jeremy Clarkson, Richard Hammond and James May, and its huge production budget. 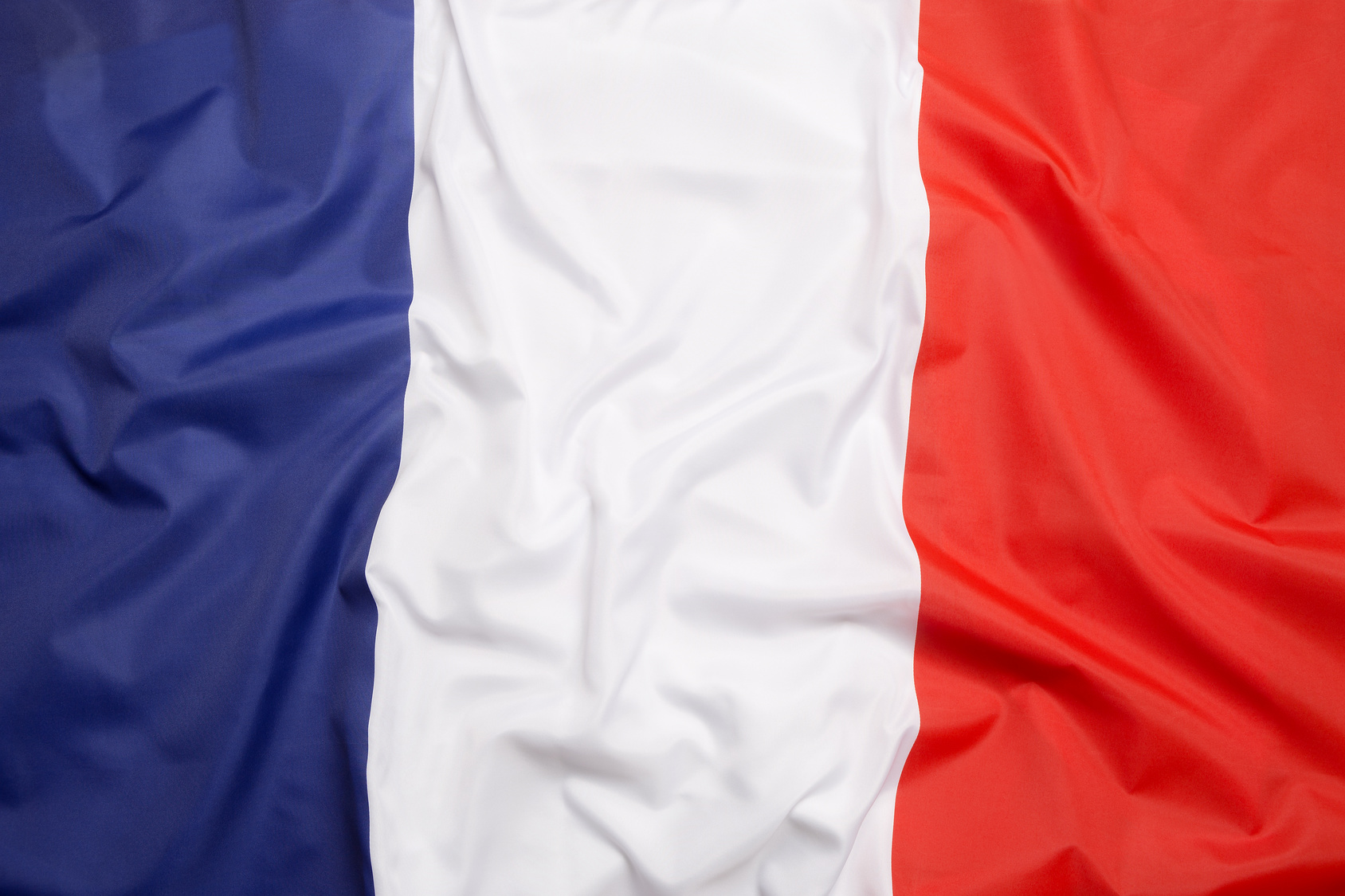 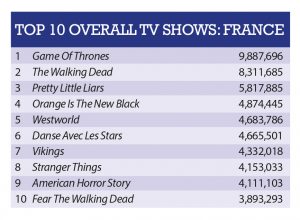 Beyond that, demand expressions were relatively evenly spread, with just two million separating the third-placed over series Pretty Little Liars and tenth-place Fear the Walking Dead. 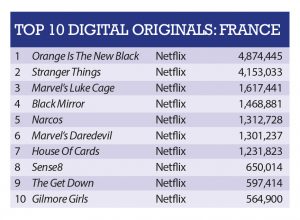 Orange is the New Black was first in the top ten digital originals chart, with 4.87 million.

However, traditional platforms rule the roost, meaning Orange is the New Black only ranked fourth overall, while Stranger Things languished down in eighth. 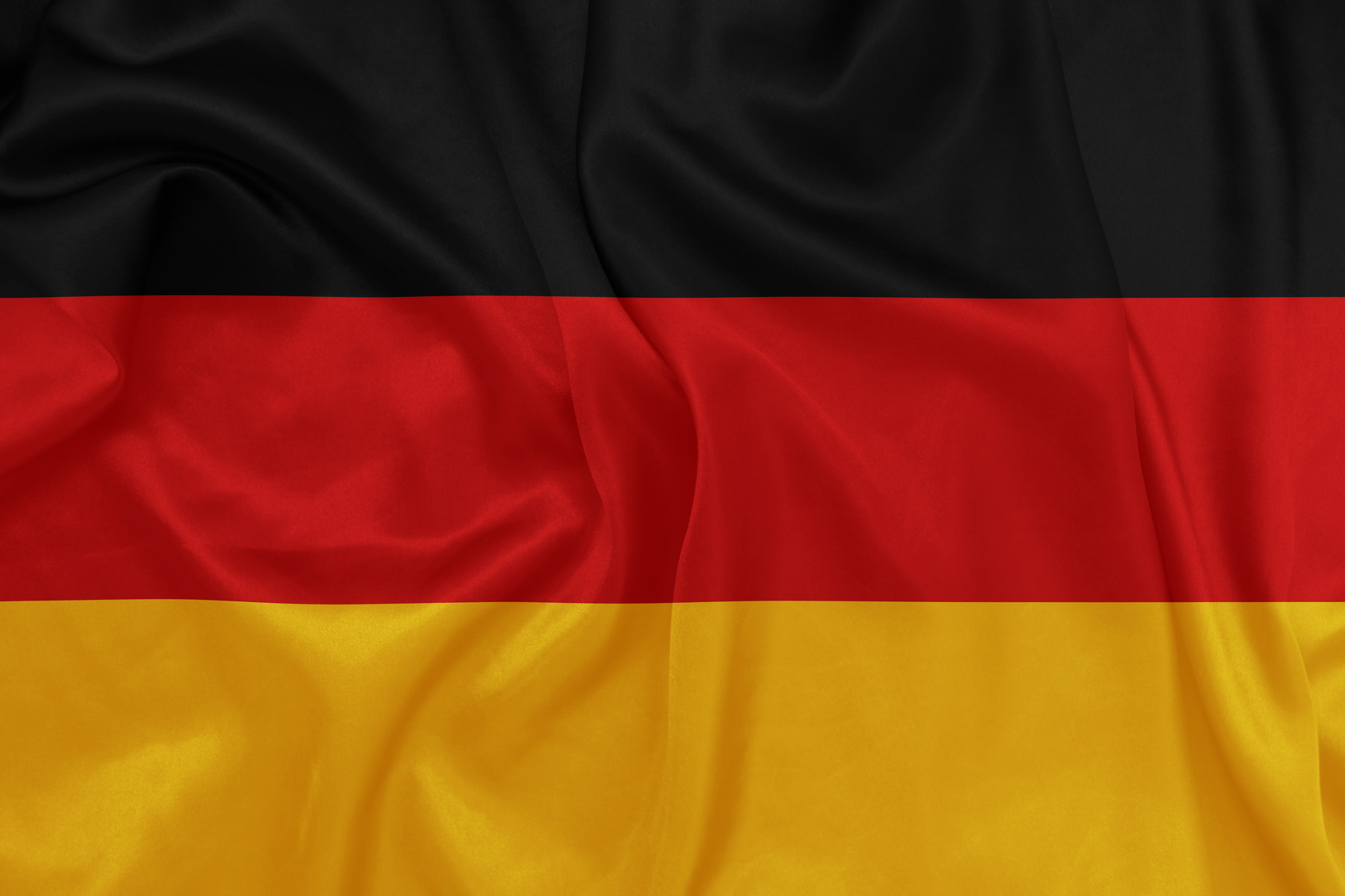 The Walking Dead had to play second fiddle to Game of Thrones in Europe’s most-populous territory too. 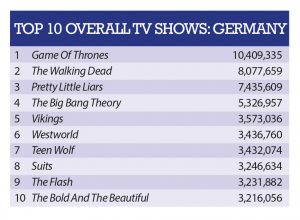 The zombie drama, locally aired on Fox, took 8.07 million average demands, leaving it nearly 2.5 million behind its rival for the crown of ‘world’s most popular show’. 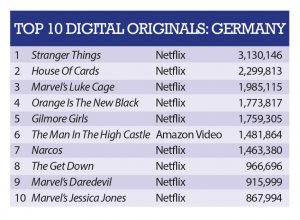 Highlighting the territory’s continuing taste for show-of-week dramas, American staples Suits and The Flash featured in the overall top ten, though the demand chart suggests a younger audience more in tune with the serialised, bingeable nature of much on-demand programming.

Stranger Things led the way (though it couldn’t crack the overall top ten), followed by House of Cards, Luke Cage and Orange is the New Black. 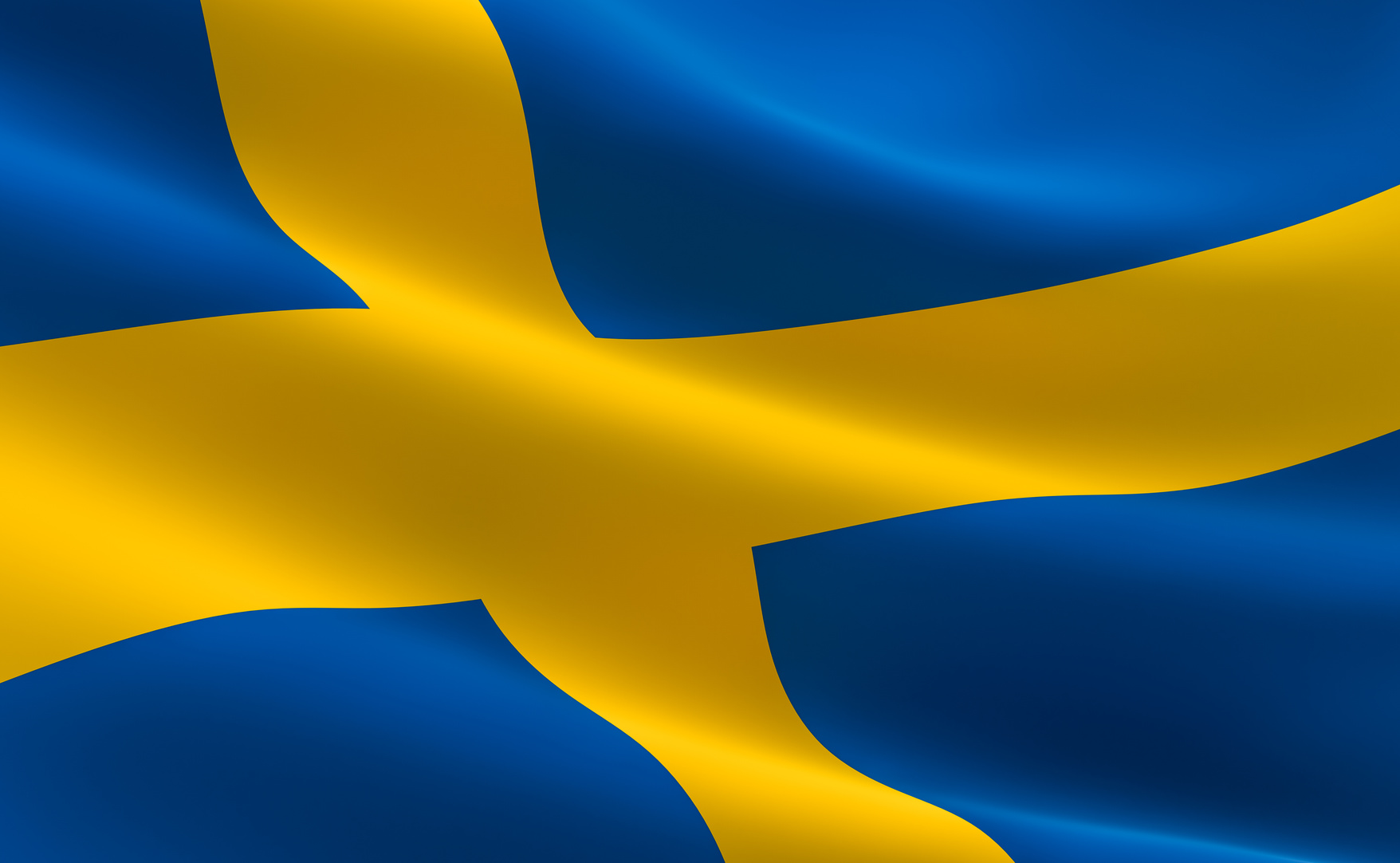 It’s another win for Game of Thrones in Scandinavia. The swords ’n’ shields epic 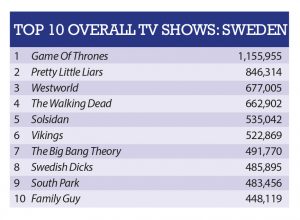 took the overall top spot with 1.15 million average demands, 27% above the competition. This pushed Pretty Little Liars (846,314) and Westworld (677,005) into second and third place respectively.

Originally-commissioned content played a part, highlighting the strength of programming coming from the region. Despite season five ending in December 2015, TV4 comedy Solisdan was fifth overall, while Viaplay’s SVOD original Swedish Dicks took the crown in the digital stakes. 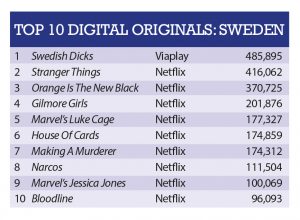 Coming in at nearly 500,000 average demands, the latter series was ahead of Stranger Things, Orange is the New Black and the rebooted Gilmore Girls.

The multinational cast suggests there is still more life in Swedish-American coproductions such as Welcome to Sweden, which played in the US on NBC before being cancelled due to low ratings. 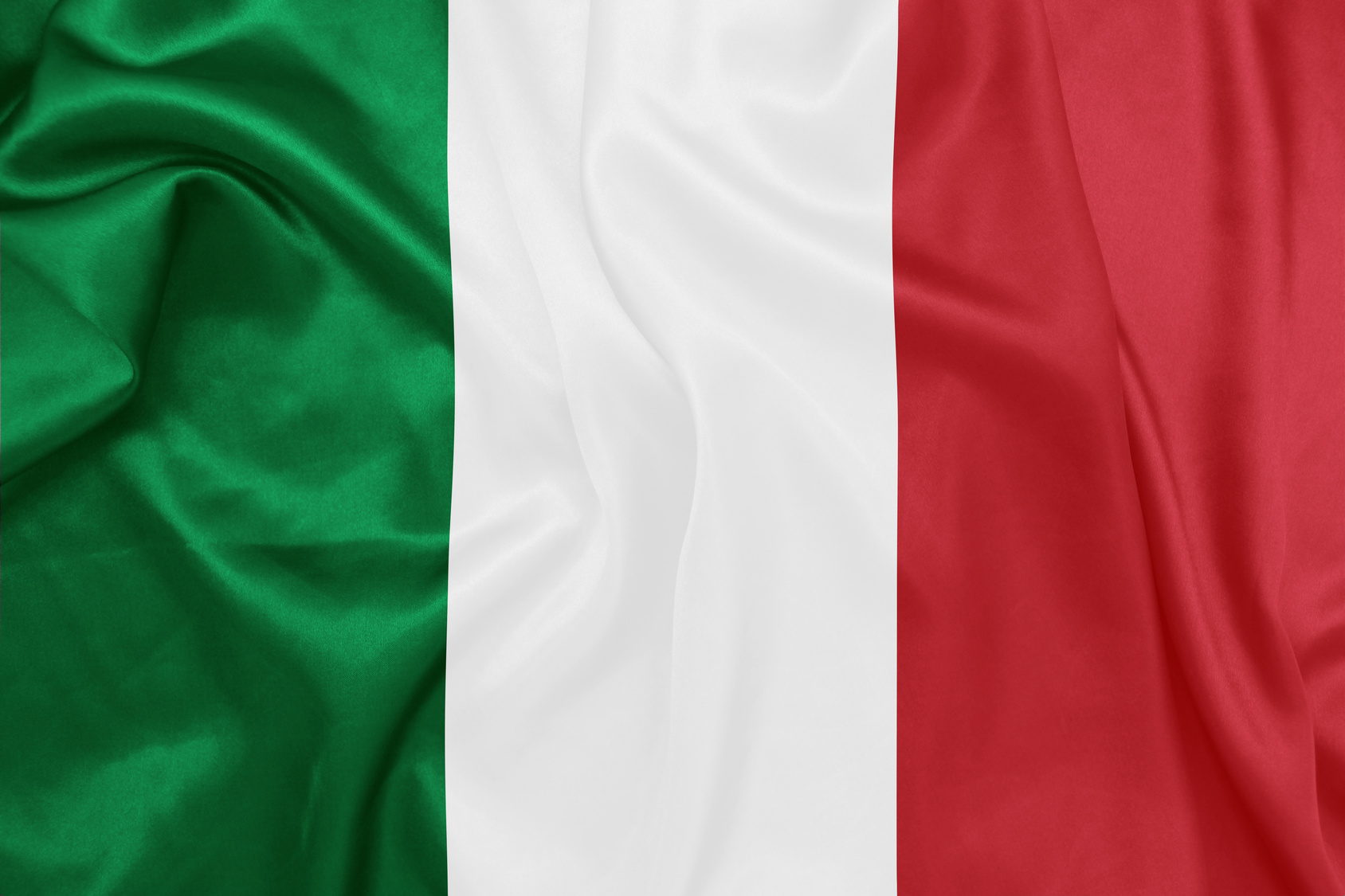 Seeing The Young Pope at the top of the overall Italian chart will be vindication for the major investment Sky Italian plunged into the Jude Law-starring original drama. 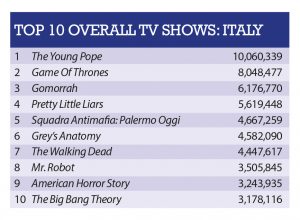 Italy was, in fact, the territory that appears to have the highest appreciation of locally-produced programming, with three of the top five overall series hailing from the territory. 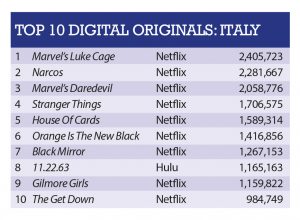 In third place was another Sky series, Gomorrah, which launched a second season in May, and Canale 5’s long-running crime and corruption fable Squadra Antimafia: Palermo Ogg was fifth. They took 6.1 million and 4.66 million respectively.

Luke Cage, Narcos and Daredevil were the top three digital originals, each registering more than two million average demands. Intriguingly, 11/22/63 was the sole non-Netflix series in the top ten, though it is not available legally. 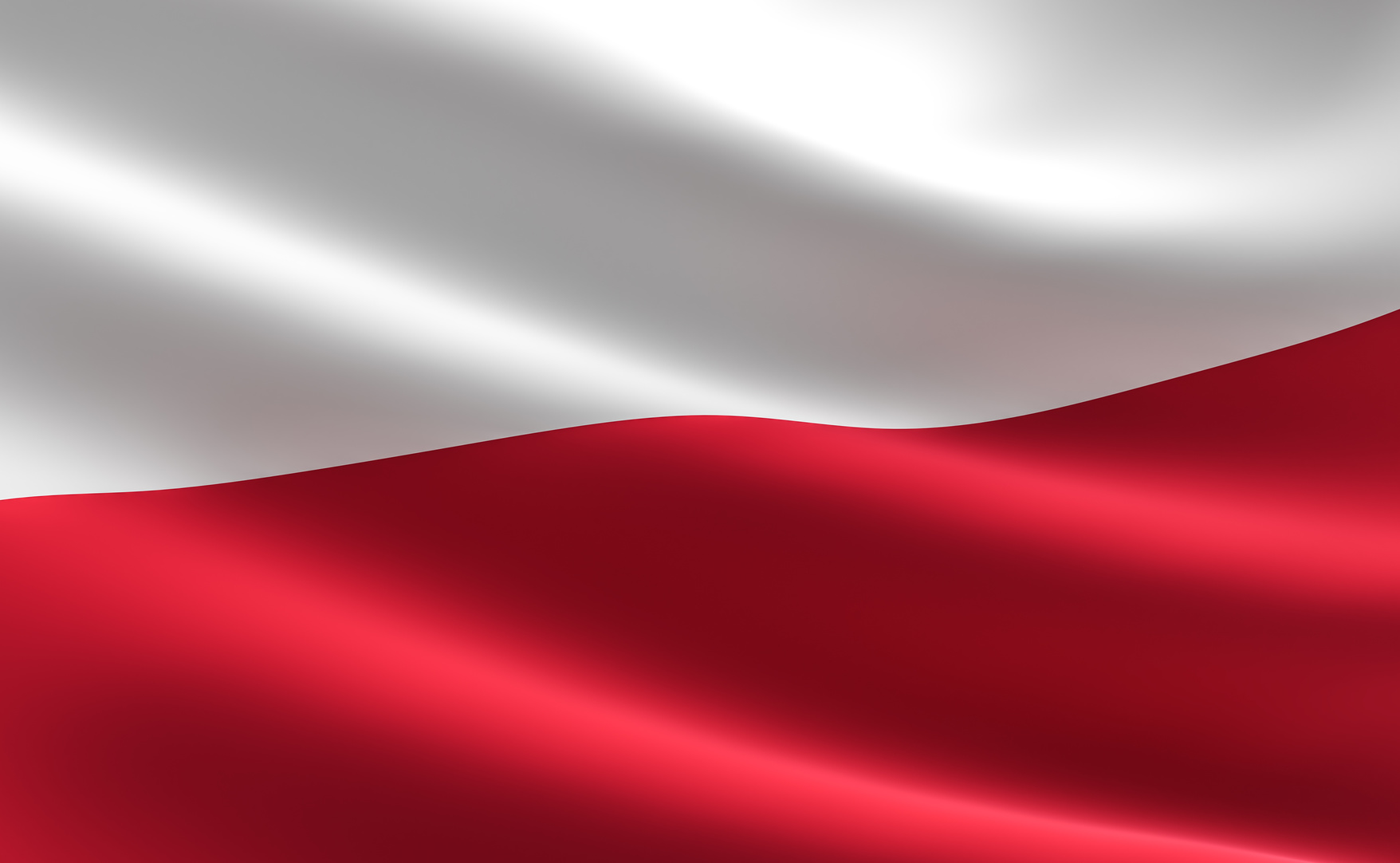 Game of Thrones outstripped its rivals with 5.55 million average 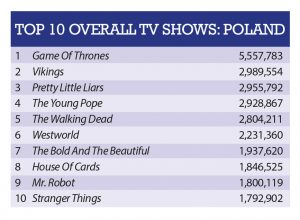 demand impressions in the overall TV show chart. Vikings (featured on the local History Channel) came second with 2.98 million, 85% behind.

Pretty Little Liars was hot on its heels, with 2.95 million. 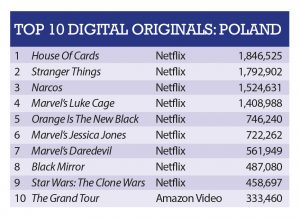 House of Cards came top trumps in the Polish digital original chart (1.84 million), narrowly beating Stranger Things (1.79 million). However, in the overall charts, they fell to eighth and tenth respectively.

The Grand Tour made its only appearance outside the UK top ten by placing tenth in the digital chart.