MIPCOM is undeniably upon the TV industry. In offices around the world, sales executives are drilling down into their new catalogues, and buyers are marking down the series that could be the game-changers for their schedules. Viewers, of course, are just interested in the best new shows available. 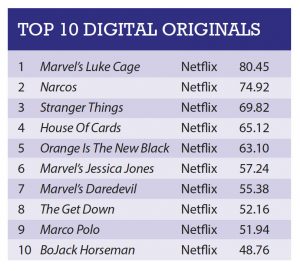 Indeed, it’s a new show that makes the biggest impact on our latest In-demand charts, data for which as always comes from Parrot Analytics. Marvel’s Luke Cage went up on Netflix in its entirety on September 30, and has immediately shot to the top of charts in Europe’s three biggest territories: the UK, Germany and France.

The Marvel Entertainment-produced show tops each of our digital charts, and runs Game of Thrones and Pretty Little Liars close for the top overall series.

Set in Harlem within the Marvel Cinematic Universe, it follows the giant Mike Colter playing the titular Cage, who attempts to rebuild his life after a sabotaged experiment gives him unbreakable skin and super-strength. Almost universally critically-acclaimed, the series scores an overall average demand rating in Europe of 80.45, well ahead of Narcos (74.92) and Stranger Things (69.82).

In the UK, demand for the show is at its highest (89.66 or 8,833,024 average demand expressions), nearly double that of second-placed Stranger Things.

In France, its 5,275,465 average expressions place it well of the competition, while in Germany the 7,321,791 daily expressions give it twice as many votes as Narcos at number two. 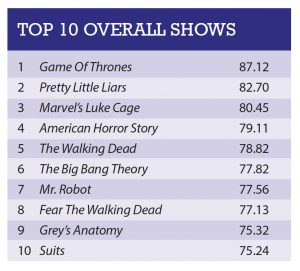 Overall, however, Game of Thrones rules the roost, as ever, with an overall score of 87.12. Cage’s averaged 80.45 only hands it third place, with Pretty Little Liars wedged in between them. A new trailer for The Walking Dead sees it take fifth place overall, and this position is likely to increase as we near the much-anticipated season seven opener.

In the UK, word-of-mouth excitement over an objectively excellent pilot translates to new Sky Atlantic/HBO sci-fi drama Westworld taking top spot, just ahead of Luke Cage, while in France and Germany Game of Thrones holds on to its crown.

There are other interesting nuggets in our data: Fear the Walking Dead remains a popular title despite mixed critical reviews and ratings considerably lower than last year’s first season. France also sees demand for titles such as Italian drama Gomorrah and Danse Avec Les Stars (the local remake of Strictly Come Dancing), while South Park’s 20th season debut propelled the adult animation into the top ten in the UK.

Only two non-Netflix originals chart in our three featured territories, with Ripper Street placing tenth in the UK and The Man in the High Castle take the same spot in Germany.

Catch our next chart in two weeks, in which we feature the eastern European territory of Hungary on the eve of the Digital TV Central & Eastern Europe event.