CBeebies controller Kay Benbow and her CBBC counterpart Cheryl Taylor took the stage at the Children’s Media Conference last week to tell content companies what is working on their services and what they are looking for.

After they had outlined recent news and the profile of their service, TBI quizzed the pair on the details

“We will continue work in the digital area; the website has been redesigned and two apps, Playtime and Storytime, have now been downloaded more than five million times. It was also a real triumph getting CBeebies Radio on the iPlayer, and Cbeebies Grown Ups now on Pinterest.

Digital is a way of enriching the experience of all of our content for our audience. We will look at short form more, it is an opportunity to do bespoke content and support existing brands. Sometimes I think it’s a way of starting things small and growing them.

“It is sometime scary as controller of CBeebies, as the template is to commission a huge run so you make economies of scale work. This approach might give me a chance to try something a bit different, be a bit bold and grow it from small seeds, so there are really interesting opportunities in short form.

“We have had some great programming successes this year. Topsy and Tim remains our standout and most popular show, we have had The Furchester Hotel and Twirlywoos do well.

“We also continue to have brilliant animation. Hey Duggeee and The Clangers have been almost instant hits. We’re not really in the business of bringing things back, and we want to do new things, but The Clangers was an exception. I love stop-frame animation and it was done with the same love, care and attention as the original, but with new technology that brings it to a new generation. 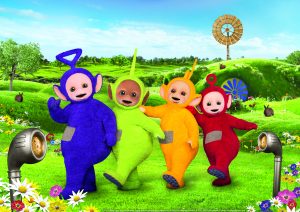 “In terms of Teletubbies, it was going to be made [after DHX Media acquired the brand] and it felt right to me that it stayed on the BBC, its home. The truth is we were going to have to stop running the original shows as they were 4-3 [screen ratio] and they weren’t HD. We think that it is a brilliant show, which is till relevant to a very young audience and it should stay with the BBC and specifically CBeebies.

“The Clangers was brought me end of 2012, it takes a long time to do stop frame, and then Teletubbies was discussed probably a year later and it took along time to make my decision, it was not taken lightly.

TBI: There is a new digital team covering interactive, social media and short form, will these guys commission directly?

KB: Everything goes through [CBBC controller] Cheryl and myself, they are brilliant support and will work with people in-house and indie who have ideas and they will help Cheryl and I make the right decisions and guide us in digital. One of the first things we will do is a short form project will come from an indie.

TBI: The audience hasn’t always moved seamlessly from CBeebies to CBBC,.‘Bridging’ has been a challenge, how are you addressing that?

KB: One way we are doing it is online, we have a game called Fly-High and Huggy, which was aimed at moving the audience across, so we’re looking at different ways of doing it across all platforms.

TBI: What are your specific commissioning needs, are there any obvious gaps or requirements?

KB: CBeebies is now really multi-genre – it is not just preschool programming. For example, we have drama in there. Drama remains of interest, and like Cheryl, we want comedy, but with funny women please. We need more women in comedy.

TBI: What are your requirements in terms of talent?

KB: Music and dance something could look at again, as we never really replaced a show called Boogie Beebies, which was done a long time ago but was incredibly popular. That is something we would look at.

TBI: Is there something you want but that isn’t coming across your desk?

One thing I remain frustrated by is I do not yet have a diverse female lead in animation. I find it disappointing that since Doc McStuffins I haven’t had anything standout across my desk, so [producers], I would like to see that please.

TBI: When you pre-buy, you take a five-year licence whereas others take two. Why is this?

KB: My experience is that is what producers want – a five-year licence for unlimited runs. This means the show can be run on the channel for that time as often as we want, which helps in terms of profile of their show and any licensing and merchandising they want to do off the back of it. My reading is that is what is wanted. If not then [producers] should tell us.

Sometime we only renew a show for two years because we can’t renew everything. There’s only so much space and so much money.