NBCUniversal’s sales chief tells TBI about the programmes on the Hollywood studio’s slate this year at the LA Screenings.

TBI: There seems to be a wide selection of comedies on the NBCU slate this year.

BM: We really like to focus on placing our comedies with the right networks that can really drive the awareness of the shows, and the breadth of comedies we’ve got this year is great for our customers. Hot & Bothered with Eva Longoria is one we have a lot of confidence in. She’s an established star and the themes of that show are very universal. They will also find those themes in Crowded.

TBI: From an international perspective, You, Me and the End of the World (aka Apocalypse Slough is a particularly interesting show due to its roots in the UK). What makes it special?

TBI: Why should buyers get excited by the reboot of Coach?

BM: It is very familiar and a brand that’s known to audiences. It’s a very American show in terms of the core theme – football – but American football is beginning to travel internationally: Friday Night Lights has sold exceptionally well, and part of the reason why it did was that the themes resonated. Coach is also family [skewed], with a relationship of father and son who’ve changed roles, and we see how that develops. Those are things people are familiar with.

TBI: A lot has been made of America Ferrara (Ugly Betty) starring in Superstore. How well can that one do, and what role will she play in its success?

BM: We know workplace comedies work very well with our audiences; we did very well with The Office. This is set in a supermarket and is about the relationships between the employees. You’ve got a great breadth of cast with different backgrounds that have to work together. Added to that, America Ferrera is a really great comedic actress and we think this will work with our audiences.

TBI: Ferrara is one of three major Latina stars featuring in new NBC shows (Jennifer Lopez in Shades of Blue and Eva Longoria in Hot & Bothered). What does this represent?

BM: The three women are all international stars and that’s how they’re perceived by our customers. Their backgrounds have very little to do with how they are perceived by audiences around the world, and that transcends what may be happening in the United States [on the network]. Two of them have big theatrical careers and, ultimately, people gravitate to them.

TBI: What else is there on the comedy front?

BM: People Are Talking is a couples comedy – one with a baby and one without. In the pilot one couple has not been out in a year and a half, and that’s a theme a lot of people struggle with; how does your life change when you have a baby, and how do you interact with other couples? It’s very edgy and a lot of fun.

TBI: Another show with international roots is revenge thriller Game of Silence (pictured), which originated from Keshet in Israel. Tell us about it. 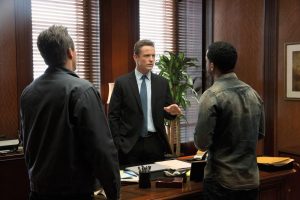 BM: This is great serialised action fiction with great auspices – Carol Mendelsohn from CSI and a very strong international cast with David Lyons (Revolution) in the lead role. Revenge thrillers really resonate with our audiences.

TBI: What can buyers looking for procedural drama expect from Chicago Med?

BM: You’ll find beautiful execution, great characters and excellent storyline development. Chicago has the potential to go to existing Chicago broadcasters, but also new broadcasters as it is a broad medical show.

TBI: Do you seek to keep franchises with one key broadcaster per territory, or do you take another approach?

BM: It depends market to market. Where we have broadcasters that have the other two Chicago shows, we encourage them to look at what the opportunities are to have the third one on their channel, but it is really a country-by-country case basis. All circumstances are unique. We were very successful in convincing buyers to take all brands of Law and Order: the original, Criminal Intent and SVU, so our customers are very confident in those shows.

BM: Shades of Blue is a procedural with extraordinary talent behind and in front of the camera. It has really compelling subject matter that works for international audiences. It doesn’t start production until June, but it will create excitement in and of itself at this market.

TBI: There seems to be plenty of new medical drama options out there this year. You have two, with Chicago and Heartbreaker. Why is that?

BM: We’ve got a real opportunity with Heartbreaker to present a really compelling medical drama to the market. Melissa George is cast as the lead in Heartbreaker, and I think there is a place for it in the marketplace with Grey’s Anatomy beginning to wane a little bit.

Medical drama travels very well internationally and people are always fascinated by it. The other one we had was House, a very big international success. We were very pleased to see we had some very strong medical dramas on the development slate at the studio because these create great success for us. It’s based on a true story. There will be a medical story of the week based on her experiences.

TBI: Finally, how has deal-making following the Screenings changed for the studios?

BM: The marketplace is more dynamic than it has been in years and that is attributed to the breadth and depth of customers. There are just so any opportunities and we just want to find the best homes for our shows. There is going to be a lot of opportunity to do innovative deal-making for our shows, and with the breadth of shows we have from the network and cable we can take advantage of all areas.