New preschool hits are thin on the ground: Peppa Pig is still the last show to break through internationally. As the show hits ten, TBI speaks with Olivier Dumont about the billion-dollar pig

Peppa Pig started out on Channel 5 and Nickelodeon UK in May 2004 and has launched in 180 territories and in 40 languages in the subsequent decade. The challenge for Olivier Dumont upon joining eOne in 2010 was not selling its key show to channels, but to maximise its off-screen potential.

“Four years ago we had sold everything on TV, but it was a UK licensing property, and it hadn’t been successful anywhere else,” says the eOne Family managing director. “I focused all of my attention on making it a success internationally and, market by market, making sure it gets the same support.”

The preschool show now ranks as the top licensing and merchandising property in Australia, Italy and Spain, and is growing in Latin America and the US. Dumont says it is generating revenues above the US$650 million annual retail figure that is referenced. “Globally it is north of US$650 million now, it will reach a billion soon given the growth,” he says. The numbers in key categories illustrate the L&M story:  10 million books, nine million DVDs, 15 million toys and 1.5 million apps have been sold worldwide.

The show was created by UK indie Astley Baker Davies, which still produces it, while eOne holds the international rights and made it the lynchpin of its kids TV sales business. “We have coloured the map pink,” Dumont says. (There are a handful of exceptions globally such as in Japan, where it has been on Cartoon Network, but never terrestrial TV.) 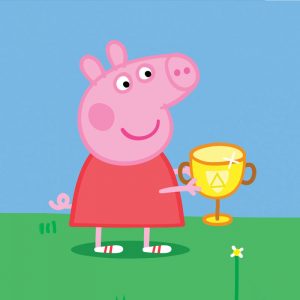 Peppa’s tenth birthday is being marked with a three-parter, the first time Peppa has appeared in the fifteen-minute format. Astley Baker Davies was initially intent on making an extended double episode (ten minutes) before deciding it worked better as a triple. The prodco has built in two natural breaks in the story so that broadcasters can also run, or re-run, the content in the regular five-minute format.

The extended Peppa is a good marketing platform for channel partners, Dumont says. “Broadcasters want to be able to say are premiering new episodes, and it helps with on and off-air communications.”

But why has Peppa become a global hit? Dumont notes that the show goes wider than the core 2-5s, and that 6-7s will tune in because the show is funny, and that humour is a secret of Peppa’s success. “Very few preschool shows are funny,” he says. “It could be funny just for kids, but Peppa is funny for the entire family. Parents enjoy it, unlike a lot of preschool, which can be torture for adults.”

Another key question for the people selling the show is how much Peppa do you need? Preschoolers will sit through repeats and the demo is constantly being refreshed, so why keep making more episodes? So far, there are 209x5mins. The majors will  generally go to 52 or more half-hours of a series. On that basis, Peppa has a way to go.

The anniversary special, entitled Golden Boots and following Peppa’s quest to find the titular footwear and take part in a puddle-jumping competition, will bow on Channel 5 and Nick UK – now sister channels in the Viacom stable – in November. Dumont says that he is hopeful there will be other specials in the future. “Hopefully it will spark more long-form story ideas for Peppa,” he says.

Astley Baker Davies is largely left to its own devices with Peppa,  given it has a proven track record, but eOne will suggest themes to include that could be the cornerstones of licensing campaigns.

Given the largest part of eOne’s business is features, is there a possibility of a Peppa movie? “We’ve discussed a feature and are always talking about it,” Dumont says. “Astley Baker Davies only has so much time [each four-and-a-half minute episode takes two weeks to animate], but we have planted the seed. It’s in the queue.”