China and UK coming together at the Children’s Media Conference

Trevor Lai will be at the Children’s Media Conference in Sheffield, UK, this week to share his thoughts on how international and Chinese kids companies can work together. Lai runs UP Studios, the China-based indie that has grown from studio for hire to creator of original shows such as Super Boomi, a CGI series in-the-making.

Raised in Vancouver and now based in China, Lai has an inbuilt handle on the clash of cultures, and will be telling delegates at the UK kids conference that there is real potential to work and sell into China, but that expectations need to be realistic.

“There’s a lot of excitement around China as a market and a lot of companies have tried to enter,” he says. “China is the biggest potential media market in the world, but at the same time, I think it takes time to build traction.”

However, there are practical steps that can be taken for would-be exporters. Lai says: “The first question is does the content even fit [in China] in the first place? Just because it has worked in the US and the UK does not mean that it will work in China, and you need to be honest in making that assessment.”

Perhaps the biggest lesson to heed is that as the Chinese kids market evolves, the process of working there is constantly changing. “There are multiple business models and they are constantly evolving, there is no one size fits all,” Lai says. “It isn’t like the US, Europe and the UK because the market is so young, so you can challenge the models in place.”

Another mistake would be to underestimate a market that, while still developing, comprises savvy consumers increasingly familiar with Western content. “This market is sophisticated in a way it does not get credit for,” Lai says. In terms of having realistic expectations, he recalls the case of a Hollywood movie that did US$40 million at the box office but generated less than US$1 in merchandising revenue. “It blew their mind – it was a wake-up call,” Lai recalls.

Lai wants UP, as an independent studio, to develop content it can take from China to the world and also wants to work as a gatekeeper, helping international content companies seeking a foot-hold in the Chinese market. He says: “We can facilitate things in different ways, it could be making introductions between publishers or content companies, it could be acquiring rights.”

In terms bringing Chinese content to the global market, there are some examples of note. Animated franchises such as Toon Express Group’s Pleasant Goat and Big Big Wolf, which has run for over 1,000 episodes domestically, has been picked up by Disney in some territories, but it does not look like becoming China’s first international breakout hit. “It succeeds on certain metrics, but it won’t have legs like SpongeBob SquarePants or the enduring Sanrio properties like Hello Kitty,” Lai says.

Other animated fare such as the Legend of Kung Fu Rabbit animated movie have been released in international markets, but was accused in some quarters of being overly similar to DreamWorks’ Kung Fu Panda, reminding China-watchers of issues around the protection of intellectual property. 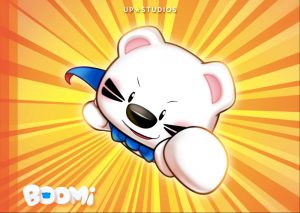 In terms exporting Chinese fare, UP is bringing Super Boomi to the global market. “It’s a positive show with a lot of creativity, the main protagonist can transform himself into anything he needs to be, an astronaut or a fireman for example, he’s an everyday hero,” Lai says. UP has shown the project to potential international partners at KidScreen and MIPCOM and will soon have a full episode, which it hopes will help conversations to progress.

“We created a Super Boomi app in December, which has given us advanced exposure,” Lai says. “We were invited to go into Apple’s stores in China, which is a stamp of approval.”

He will be in Sheffield as part of the second CMC International Exchange, which is designed to foster relations between international commissioning executives, buyers, coproduction partners and funding agencies and potential partners in the UK.

The exchange takes place on July 2, the first day of the CMC event, with attendees then joining the rest of the conference on July 3 and July 4.