The sales arm of French pubcaster France Télévisions has acquired rights to new animated programming from the Peanuts brand. 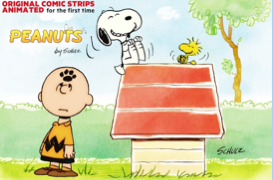 France TV Distribution has closed a deal with Peanuts Worldwide to represent the new toon content, which
N O R M AA L Animation and France Télévisions are coproducing as part of a strategy to build new content around the comic brand.

The Peanuts comic strips have been packaged as 500×90’ shorts and 104x7mins episodes and will be available for global acquisition in the autumn. France 3 will run the content in France.

“Partnering with a global distribution partner like France TV Distribution is a great next step for us as we continue to build new content for Peanuts around the world,” said Neil Cole, CEO, Iconix Brand Group, which owns Peanuts Worldwide.

“Getting in front of younger generations is a key strategic initiative for Peanuts, and there’s no better way to do this than creating and distributing easily consumable content like these beautifully crafted animations from N O R M AA L,” he added.