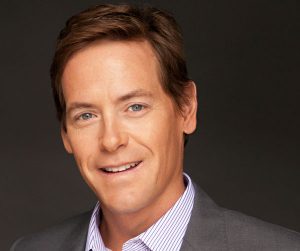 National Geographic is on the hunt for more brainy and interactive projects following its recent success with Brain Games and a range of smart shows.

Traditional natural history fare will still play on the Nat Geo Wild channel, Owens said, but “engage your brain programming” is the order of the day on Nat Geo.

Owens said his challenge, upon joining the 21st Century Fox and Nat Geo Ventures-owned channel operator, was breaking new ground in factual TV and the move to brain-related shows is in part borne out of that challenge.

“In the internet age showing people new things has become more difficult so we have got into metaphysical exploration – exploration of the mind,” Owens said. “Brain Games (below) is the beacon that separates us from the competition.”

“It’s not an ‘Ice Road’ or a ‘Clam Finder’ or a ‘Swamp Master’ or ‘Ginseng Hunter’ although we do have some of these [type of] shows” he added, highlighting the brainy shows perform a useful function in separating Nat Geo’s schedule from that of other factual channels grids that are largely comprise character-led ob-docs.

In-house produced Brain Games started out as a three-parter in 2011 and has subsequently spawned two full-length series. In the show the host Jason Silvar – who Owens says is an “ideas DJ” – runs brain games and experiments, many of which encourage the viewer to participate.

Owens revealed: “We’ve got twenty more episodes of Brain Games coming, it’s the number one series for us.”

The interactive element attracts huge social media activity and, Owens said, it is building Nat Geo’s profile unlike other types of show where “people tweet but don’t even know what channel the programme is on.”

Buoyed by Brain Games’ success a numerical spin-off, The Numbers Game (above left), was greenlit. Like its predecessor it was a three-episode show that went on to get a full series run.

Other shows designed to stretch the grey matter include Duck Quacks Don’t Echo (below right), originated by Magnum Media in the UK, and GRB-produced Showdown of the Unbeatables, which has inventors and entrepreneurs facing off and pitching their inventions against one another – the makers of a bomb proof door versus the makers of a military cutting tool for example. 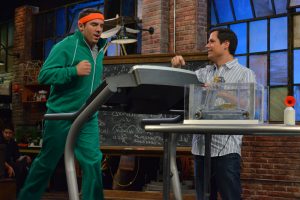 National Geographic Channels International has also ordered a series and four special about the human mind from a range of UK producers. Renegade Pictures is making two-part special Street Smart, which will be a companion piece to Brain Games. It will use experiments to quiz people’s critical thinking faculties. Blink Films is making three-part series Ape Man about human’s most basic instincts and their roots in the primate world.

One-hour doc Blow Your Mind will be made by UK producer Twofour and using experiments and stunts will show how much the unconscious parts of our brains control our bodies.

Windfall Films and So Shoot Me TV are making Card Shark (below) in which professional magician Drummond Money-Coutts looks at the role of playing cards in tricking our perceptions. 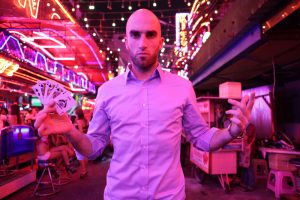 Owens said, mindful of all the above mentioned series and specials, Nat Geo is looking for more brain-stretching ‘smartertainment’.