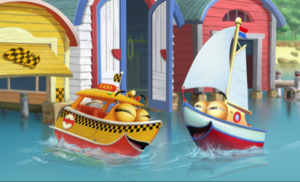 Essential’s latest drama series Rake is set to launch on Fox in the US later this season, coproduced with Fedora Entertainment and Sony Pictures Television, but it is also active in the kids’ space.

At MIPJunior, it will launch Bubble Bath Bay (left), which it is producing for ABC in Australia, along with Telegael from Ireland and Malaysia’s Ideate Media and Lemon Sky Animation And Games Studio. Bejuba! Entertainment is handling international distribution.

The adventure-themed series follows Sydney the Sailboat and his nautical friends. “The charm and attention paid to the detail is sure to make this series a resounding success,” said Bejuba!’s president Tatiana Kober.

Alien TV, meanwhile, is a co-venture with Entertainment One’s eOne Family unit, and is a 26x30mins animated series about an alien news crew’s wacky misinterpretation of Earth. It comes from art director Ian Brown.

Essential will also be launching Mending Millie, a series based on a character developed by Australian animation artist Beini Huang. The company’s head of children’s entertainment Carmel Travers said: “Beini has enormous talent, with a fresh eye and a very funny take on what it’s like to observe the world through the eyes of two year old, Millie, her grandfather and his enormous dog, Bowie.”

Finally, MY 24 is a 24x13mins kids factual show developed in partnership with Australian Children’s Television Foundation. It’s based on an original idea from Essential and producer Penny Robins. It tells the story of young people whose lives were changed in 24-hour periods. ACTF is distributing.