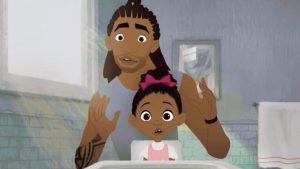 US streamer HBO Max is expanding its animation offering after ordering a 12-episode season of 2D series Young Love, based on characters created by director and former NFL star Matthew Cherry.

The show expands on Cherry’s characters from his short film Hair Love, which centers around the relationship between an African-American father and his daughter Zuri.

Young Love explores how millennial parents Stephen and Angela and daughter Zuri juggle their careers, marriage, parenthood, social issues and multi-generational dynamics while striving to make a better life for themselves.

The new series is from Sony Pictures Animation and has Cherry attached as showrunner alongside long-time animation creative Carl Jones (The Boondocks). The series will be executive produced by Blue Key Entertainment’s Monica A. Young (producer of Hair Love) along with Lion Forge Animation’s David Steward II and Carl Reed.

“Hair Love struck a chord that is still resonating deeply with audiences of all ages,” said Billy Wee, SVP of original animation at HBO Max. “Matthew and Sony Animation’s creative voices are a welcomed addition to the HBO Max family and we can’t wait to bring this joyous story to the world.”

Cherry added: “I am beyond excited to continue telling the story of Stephen, Angela and Zuri and further explore the family dynamics of a young Black millennial family we established in our short film Hair Love as an animated series”