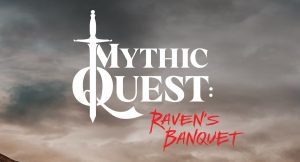 Apple TV+ is to drop all nine episodes of its upcoming comedy series Mythic Quest: Raven’s Banquet in one go when it launches on 7 February.

The launch plan stands in contrast to other Apple TV+ series, like The Morning Show, See and For All Mankind, which have been released on a weekly basis.

Mythic Quest: Raven’s Banquet is executive produced by McElhenney and Day under their RCG banner; Michael Rotenberg and Nicholas Frenkel on behalf of 3Arts; and Jason Altman, Danielle Kreinik and Gérard Guillemot, for Ubisoft Film & Television.