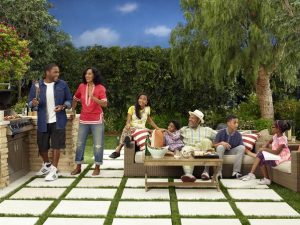 ABC’s senior VP and head of comedy Jamila Hunter is to depart the company to join Kenya Barris’ Khalabo Ink Society, to run the company under the recent Netflix deal which will see it develop new comedy series for the platform.

She will now act as president of TV for Khalabo Ink Society.  There is no current replacement for her former role at ABC as the implications for staff after Disney’s acquisition of Fox assets is not yet clear.

Hunter has worked with ABC since 2011. During this time she worked on titles such as Fresh Off the Boat and Last Man Standing.

“Jamila has always understood my vision as a storyteller — and that was evident when she bought black-ish in the room 5 years ago,” Barris said.

“She’s continued to be a champion of the work every day since that meeting, and I couldn’t be more excited to have the opportunity to reunite with her in this chapter of Khalabo Ink Society. I consider her not only a personal friend, but a professional ally and someone I truly believe has one of the greatest taste meters in town.”

Hunter, whose exit was initially confirmed by Variety, has has various roles across OWN, NBC Entertainment, 20th Century Fox and Bravo.

Barris signed a multiyear deal with Netflix this August to produce new series exclusively for the platform.