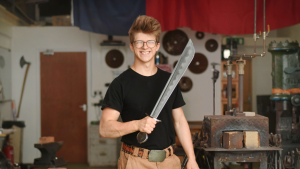 Forged with Steele follows the YouTube star, and blacksmithing enthusiast, as he recreates an array of historic weaponry in his Norwich forge.

The title will be placed on A+E Networks UK’s flagship channel History and premiere in the region in October.

Forged with Steele is a companion title for hit History seires, Forged in Fire. It was commissioned by Dan Korn, VP of programming at A+E Networks UK.

The series is produced by Studio71 in the UK and is executive produced by Jody Smith, creative director. It will be distributed worldwide by Red Arrow Studios International.

Korn said: “History first came across Alec Steele a year or so ago, when commissioning a series of short films called Forged in Britain. Since then, Alec has become a YouTube phenomenon and we are delighted to be collaborating with him on this new series, showcasing the full range of his remarkable and captivating talents.”

Forged with Steele has completed production and is set to broadcast in Sweden after its debut in the UK. History is available on Sky, Virgin, BT and TalkTalk in the UK.