Endemol Shine Boomdog was formed in November 2017 following the merger of Endemol Shine Latino and Mexican indie Boomdog, and has been steadily increasing its Spanish-language scripted and unscripted production for the US Hispanic and Mexican TV markets. 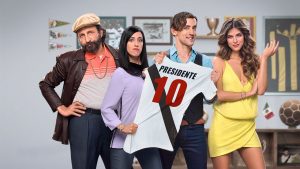 He has also produced a number of Spanish feature films, including Bajo la Sal and Nosotros los Nobles.

Endemol Shine Boomdog chief exec Alejandro Rincon said: “I can’t think of a more accomplished, better-suited producer and executive than Leo Zimbron to lead our fast-growing scripted team here at Endemol Shine Boomdog. We recently began our push into developing high-quality scripted content and Leo’s arrival will undoubtedly supercharge our efforts; we are all excited about his arrival.”

Zimbron added: “It’s a strong opportunity for me to grow a premium TV business that is now the to-go media for the most respected filmmakers in the world. My goal is to develop projects that will appeal to big talent in all the areas and to also find new storytellers.”