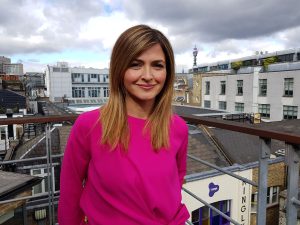 Fulwell73, the producer of James Corden’s Late Late Show and Roast Battle, is expanding its development team with the hire of Whizz Kid’s Caroline Roseman as UK head of development.

In the newly created post, Roseman will work across Fulwell’s entire TV slate including new formats Pants on Fire and Virtuosos. She will report to senior executives Heather Greenwood and Carly Shackleton.

Roseman worked at Whizz Kid Entertainment for eight years, where she was most recently head of development and created BBQ Champ for ITV and won the business to produce Lip Sync Battle for the UK.

Prior to Whizz, Roseman spent six years at ITV Entertainment as part of their in-house development team. She was also the creator of the MTV format Ex on the Beach.

She started her career at ITV Sport and was a producer on Sky 1’s show Football’s Next Star with Jamie Redknapp.

“The Fulwell 73 story is as compelling as their content and I’m absolutely thrilled to be a part of their next chapter as they expand in the UK and across the world,” said Roseman.

“Their reputation for quality and innovation, trailblazing entertainment and great story-telling has made them a trusted home and go-to production company for A-list stars, broadcasters, film studios, record labels and brands.”

Fulwell 73’s partner Leo Pearlman: “Caroline is simply one of the most talented development executives working in TV and her track record creating or working on some of the biggest hit shows in entertainment programming over the last decade speaks for itself.

“Her experience across multiple genres – music, entertainment, sport and talent-led specials – means she’s the perfect fit for us and our existing highly talented team so it’s great to have her onboard.”