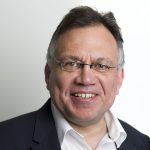 The trio have created Inquisitive Media (stylised InQuisiTiVe Media), whose interactive on-demand service IQTV is first launching in the UK before an international rollout follows.

The service is dedicated to superserving quiz show fans.

D’Halluin left Zodiak upon its merger with Banijay Group two years ago and later turned up at France’s M7 Group as chairman.

Former Zodiak UK boss Henwood took on the same role at the merged business, but exited Banijay UK in 2016.

Henwood is chairman of the company, with James and d’Halluin co-founders.

Programming deals have been struck with BBC Worldwide, Channel 4 and Banijay Rights, allowing subscribers to watch a variety of game shows such as Mastermind, Celebrity Mastermind, A Question of Genius, Only Connect, The Weakest Link.

There is interactive playalong technology built in to the service, meaning viewers can compete in individual episodes.

Henwood told TBI he and his co-founded have financed the company along with unnamed personal connections, and that a new funding round will happen “just before or after launch to support more marketing investment”.

“This is a unique proposition in the world of SVOD, addressing an important gap in the market. Intelligent quiz shows represent an attractive, untapped genre for a niche SVOD service,” he said in a statement. “They have significant and very loyal audiences, their brands are enduring, their hosts are highly recognisable with a strong social media following, and they have had a relatively limited airing on multi-channel television.

“While there has been a well-documented focus on scripted content and millennial audiences, older viewers and non-scripted passion genres represent a real gap in the VOD landscape.”

BBC Worldwide UK television sales and business development director Jonathan Newman said: “SVOD is the perfect medium for harnessing the potential for re-discovery and celebration of classic content; this new venture promises to demonstrate exactly that.”

“Through our agreement with IQTV we’re delighted that true gameshow fans in the UK and the Repulic of Ireland can discover and play along to classic episodes and comedic moments made famous by the much-loved Richard Whiteley and his number crunching co-host Carol Vorderman.”