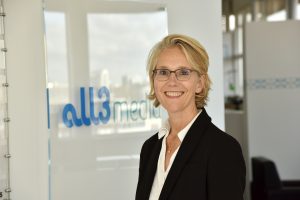 All3Media is set to invest in drama label Witchery Pictures, which was recently launched by Red Planet Pictures Siobhan Finnigan and Judith King.

The outfit is also co-owned by New Pictures, with its CEO Charlie Pattinson taking some responsibility for Witchery shows in their early years.

Finnigan and King met while working together at Red Planet Pictures, where they originated and won BBC and ITV script commissions for projects with Andrew Davies, James Dormer, David Harrower and Peter McKenna.

Jane Turton (pictured), All3Media CEO said: “Witchery Pictures is a perfect example of what All3Media is all about. We’re thrilled to welcome these creative, talented women to the group and excited to see what they will no doubt achieve under the expert guidance of Charlie and the New Pictures team.”

Finnigan and King added: “We wanted to create a series with the same dry wit and warm heart as Irish classics The Commitments, or Once for a new generation – and the combination of Gary Lightbody’s iconic songwriting and Aoife’s utterly original voice has produced something that’s absolutely nostalgic and escapist yet unlike anything we’ve seen before.”