Sports themed gameshow in the making Hit It has triumphed in the first ever ATF Formats Pitch. 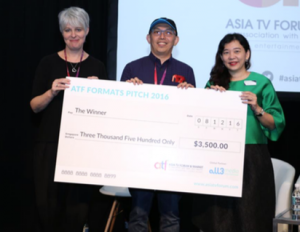 The competition was run by All3Media International, which is expanding its Asian activity, and the organisers of ATF.

It was designed to recognise the best locally-originated format ideas.

Indie prodco Xtreme Media won the inaugural Pitch with its idea for a funny, high-pressure weekly gameshow based around sport, in which teams take part in crazy challenges.

The producer beat competition from across the region. The field was narrowed down to five shows, originating from China, Malaysia and Singapore among other territories.

William Lim, executive producer at Xtreme Media said: “We are honoured to have won the first-ever ATF Formats Pitch as we now have the opportunity to work with a well-established format distributor, All3Media International, to further develop our concept.”