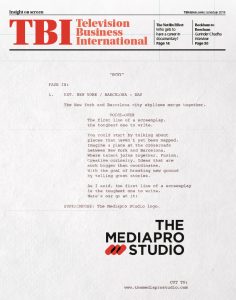 Beyond Neverland Kew Media Distribution has quietly become a documentary powerhouse. But how will they top Leaving Neverland?

Bigger, better and celebrity-laden How sustainable is the documentary field when only films about specific genres with high-profile subjects seem to be getting traction?

The House that Gurinder built From Bend It Like Beckham to Beecham House, filmmaker Gurinder Chadha tries her hand at TV for the first time

In search of a true original TBI reports from Series Mania, where we catch up with The Virtues writer Shane Meadows on his most personal project yet

Is this the end of LA Screenings? Global buyers and studios discuss the fate of the June screenings

Plus: TBI Hot Picks The top scripted and factual titles heading to summer markets, including NATPE Budapest, Sheffield Doc/Fest, Sunny Side of the Doc and Conecta Fiction

What’s new at NATPE? TBI catches up with NATPE boss JP Bommel and his plans for the annual market in Budapest