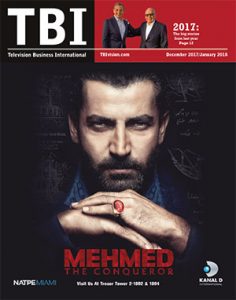 Top 10 stories of 2017: A look back at the stories, themes and narratives that defined last year, from the emergence of Apple as a player in original content to the fallout from the Harvey Weinstein scandal

Award winner: Cathy Payne The Endemol Shine International CEO picked up the Content Leader of the Year prize at TBI’s Content Innovation Awards in October last year, and here she talks about the changing face of distribution

TBI interview: Giorgio Stock The president of Turner in Europe, the Middle East and Africa tells Jesse Whittock about a record year for the business,which is repositioning as a content owner rather than a broadcaster

Casting the net Television has been improving diversity on screen to great success, but what about behind the cameras? Kaltrina Bylykbashi speaks with key casting directors about what should happen next

Lat Am formats Latin America may be best known for telenovelas and scripted content, but there is an increasingly good unscripted scene in the region, Emiliano de Pablos reports