From the US, India and Germany, to Brazil, the UK, Spain, Canada and numerous others in between, the TBI Distributor’s Survey 2022 is the industry’s most extensive exploration of the global sales business. Join us as we explore what’s changed over the past 12 months and find out where we’re headed next. Here we examine results from the unscripted sector

While docs have been enjoying a period of growth for some time, the sector may become a victim of its own success as the cost of production begins to rise, creating drag on the returns reported by distributors

With the cost of scripted productions soaring in price, those operating on the unscripted side of the business have found rich pickings among streamers and broadcasters looking for less budget-heavy fare.

Flick through the carousels of almost any streamer and the rise of unscripted programming is immediately apparent. From tentpole docs that can grab the attention on social media and newspaper headlines, to the consistent demand for premium factual entertainment programming, it hasn’t been a bad couple of years for many unscripted distributors.

Yet there are signs that the good times are beginning to come to an end, or at least a deceleration. As demand for premium docs and docuseries has soared, for example, the allure of A-list talent to front shows has never been greater. This is in turn pushing prices up and making returns for distributors a more complicated affair. 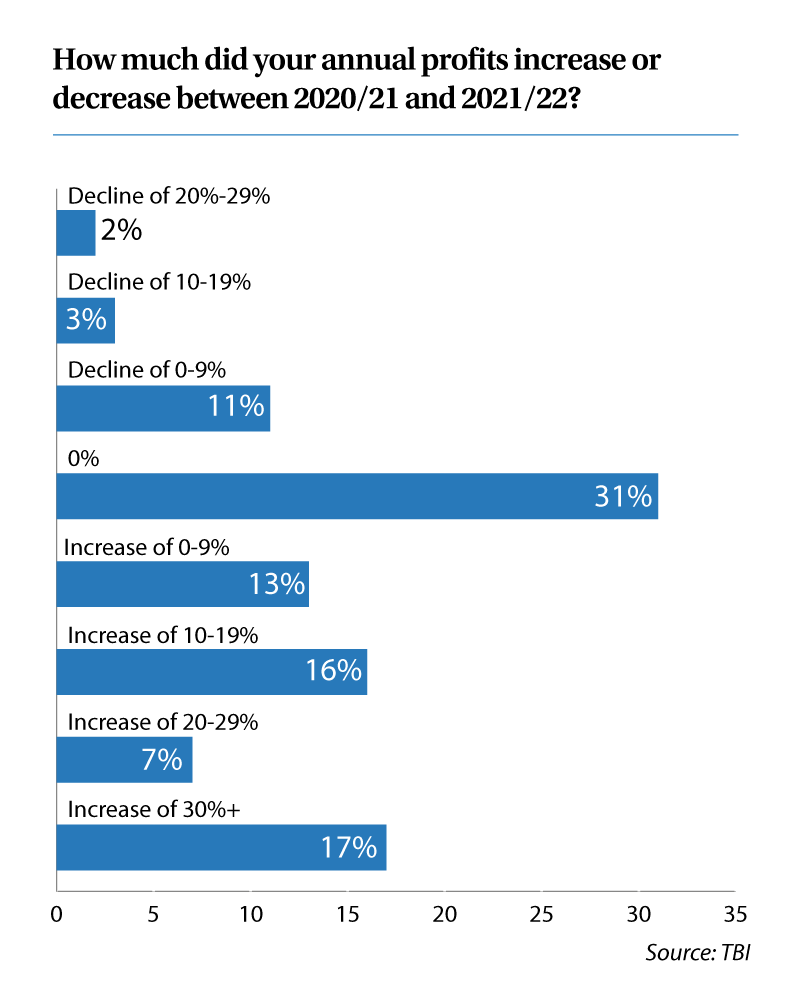 While that may be the case, the revenues being reported to this year’s Survey suggest that 2021/22 has been a positive 12 months for most. Just over 40% of distributors working in the unscripted space reported risens of 30% or more, while a further 17% said they had experienced growth over the past 12 months of between 10-19%. Just under a quarter said revenue growth stood at between 0-9%, while there were declines of between 0-9% for 7% of respondents, but none of the companies involved recorded a decline greater than 20%.

Following a similar pattern to those operating in the scripted sector, profits did not rise in tandem with revenues. However, it was another largely positive story for most companies’ bottom lines, with 17% reporting an increase of 30% or more on 2020/21 and 7% recording a rise of between 20-29%.

In part, this could be down to the impacted profits of distributors last year when pandemic costs hit some businesses hard. And while some companies saw profits surge, the majority reported incremental rises with almost half recording similar profits to last year or growth of between 0-9%.

There are also fewer expectations for rapid expansion on the staffing front, according to the results, with more than half of respondents claiming that they expect levels to remain static over the year. Companies experiencing growth, particularly some smaller outfits, are more optimistic with 13% believing their staffing levels will rise by 10-19% and 9% expecting their workforces to increase by up to a third over the next 12 months.

There was more certainty from respondents that the market would improve over the next 12 months, with only 6% expecting things would get worse. Catalogues are also getting bigger, with more than 90% reporting that shows on their books had increased in number.

Doing the business on the genre front, meanwhile, was true crime. More than half of respondents put shows from this genre among their best sellers, while history programming also outperformed many expectations and secured the votes of 48% of distributors (who were able to pick multiple genres).

Evergreens such as cookery and travel remained buoyant, with a respective 25% and 32% putting shows for these genres among their best sellers, while reality claimed the votes of 36% of companies.

Growth over the past year, meanwhile, has come largely from the US according to the Survey’s findings, with European buyers and those in Japan also cited as showing particular demand. And despite the increase in interest for unscripted, there was a similar number of companies claiming to be financing unscripted series earlier than ever before, while 56% of respondents said they would not finance a show without a commissioning broadcaster or streamer.

While streamers have provided much of the fuel for the surging interest in unscripted, there remain challenges with the global operators’ rights models, which were cited among the major challenges by respondents (who could pick multiple challenges). Yet while these have been factors at play for some time, the surging cost of production was in evidence as the cost of off-screen talent and associated shortages surged to prominence among the challenges facing the unscripted industry.

Production delays were also cited as a major problem facing distributors, although many pointed that the pandemic-induced problems were beginning to dissipate.

Market consolidation has also been causing headaches, respondents said, while buyers keen to play it safe helped to drive ‘risk aversion’ to new heights as well. Just as well then that respondents seem to have overwhelming confidence in the growth of buyers over the coming year, with global streamers among those predicted to be increasing their demands. However, again, it is the acquisition activities of FAST channel operators that are predicted to offer the biggest growth potential, as expansion across North America begins to be felt more widely around the world, providing a flurry of new windows for rights holders.

Certainly, the prevalence of ad-supported viewing is growing but while distributors are predicting big things, revenues from AVOD remain at relatively low levels. Almost 30% of respondents said AVOD represented between 10% and 25% of their overall revenues, while a further 42% put it at just 10%.

FAST remains largely a nascent area of business for many and the vast majority (73%) of respondents said it contributed around 10% of overall revenue in 2021/22. How that will change over the next 12 months will be fascinating to watch. 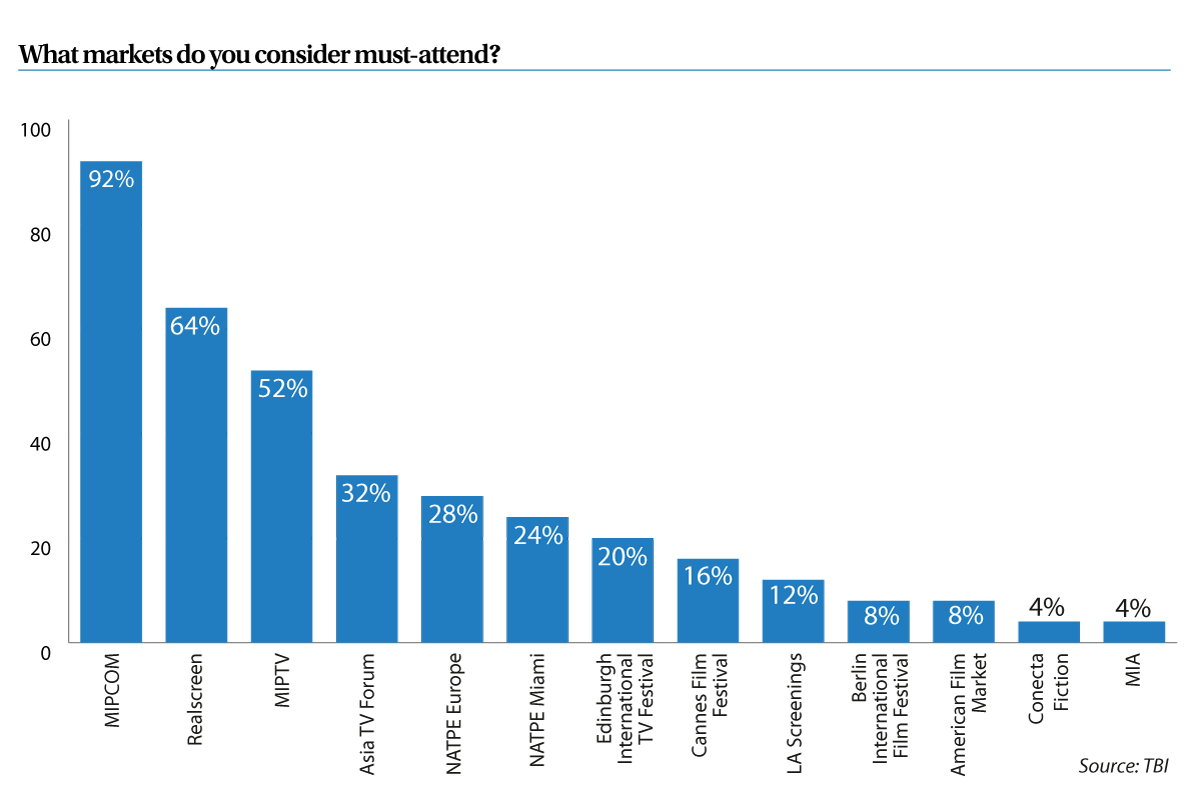