From the US, India and Germany, to Brazil, the UK, Spain, Canada and numerous others in between, the TBI Distributor’s Survey 2022 is the industry’s most extensive exploration of the global sales business. Join us as we explore what’s changed over the past 12 months and find out where we’re headed next

Twelve months is a long time in TV. Rewind to this time last year and the industry was staggering somewhat uncertainly out of the pandemic as production hiatuses and inflating costs hung over the entire business. AVOD was being touted as the next big thing, FAST was rapidly emerging as the real deal Stateside and unscripted programming was driving returns. So what’s happened since?

Many of the same trends are still in play, but changes in the way that US studios do business are beginning to make their presence felt for distributors everywhere – for better and worse.

Taken as a whole, the picture looks positive for the scripted sector, which has seen increased revenues and streamer demand, while crime dramas, thrillers and relationship-focused shows have flourished

There is little doubt that scripted product remains the major driver for those looking to cut through in the increasingly tough world of streaming. For distributors working in this part of the business, it has been another tumultuous year as the worries of production pauses caused by Covid-19 gave way to ever-increasing costs as the price of talent in front and behind the camera rose.

Yet talk to most execs working in the world of scripted distribution and it has been a similar message through the year: things are looking pretty good. That is certainly reflected in some of the standout figures from this year’s Survey, with almost a third of respondents reporting that revenues increased by 30% of more. The picture further down the growth pyramid remained steady too, with a combined 12% of respondents experiencing revenue increases of anywhere between 10% and 29%, while a further 29% said that revenues had increased between 0% and 9%. 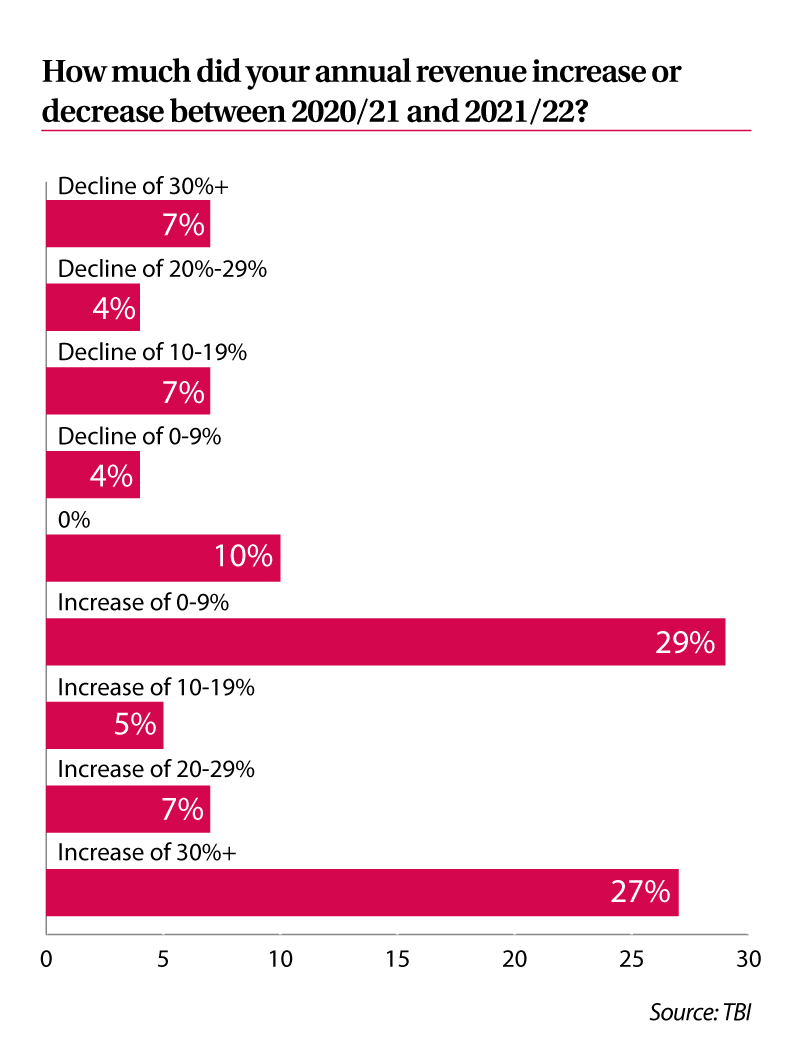 AVOD continues to be one area to watch for the bean counters, with 15% of respondents claiming it contributes more than 50% of their overall revenue. In the main, however, this area of business remains a small but growing percentage of the overall pie, with more than half (55%) of respondents reporting that it contributes around 10% of overall revenue.

While revenues overall were up, dig a little deeper and the impact of surging costs is clearly affecting the bottom line. Profits remained buoyant for most respondents, although 48% reported growth of between 0-9% on last year, while only 11% saw profits rise 30% or more above their 2020/21 figures, in contrast to the revenue numbers.

Despite this, optimism shines through many of the findings. Only 8% of respondents said they expected to cut staffing over the next 12 months, with the majority (65%) expecting their workforces to remain steady. A noteworthy minority – 21% – said they expected staffing levels to increase by 30% or more, while 85% of respondents said they believe the market will improve over the next 12 months.

A further 92% reported that their catalogues were larger than 12 months ago and there were yet more signs of surging competition for product, with 82% of respondents financing scripted series earlier than ever before. Drama and crime emerge as the killer genres – both received the most votes from respondents answering which genres were selling best (with respondents allowed to pick multiple genres).

The Survey also reveals, however, the breadth of demand for programming from buyers. Crime stood out, but thrillers were also key sellers, while relationship-focused series gained votes from almost 70% of respondents. Comedy has also seen an uptick, but sci-fi, horror and historical series have performed less well, respondents said.

While distributors, in the main, seem to have experienced a buoyant 12 months on the scripted front, the ongoing challenge are delays, respondents said, with almost 40% putting this issue among the key problems they face.

Other areas of concern include off- and on-screen talent shortages and cost, while the preference for global rights from select SVODs continues to affect distributors, with this issue being highlighted by 29% of respondents (who were again allowed to pick multiple options). Perhaps inevitably, there was also disquiet around the accessibility and control of rights, while market consolidation and risk aversion from broadcasters were also cited as factors that could affect the coming 12 months. 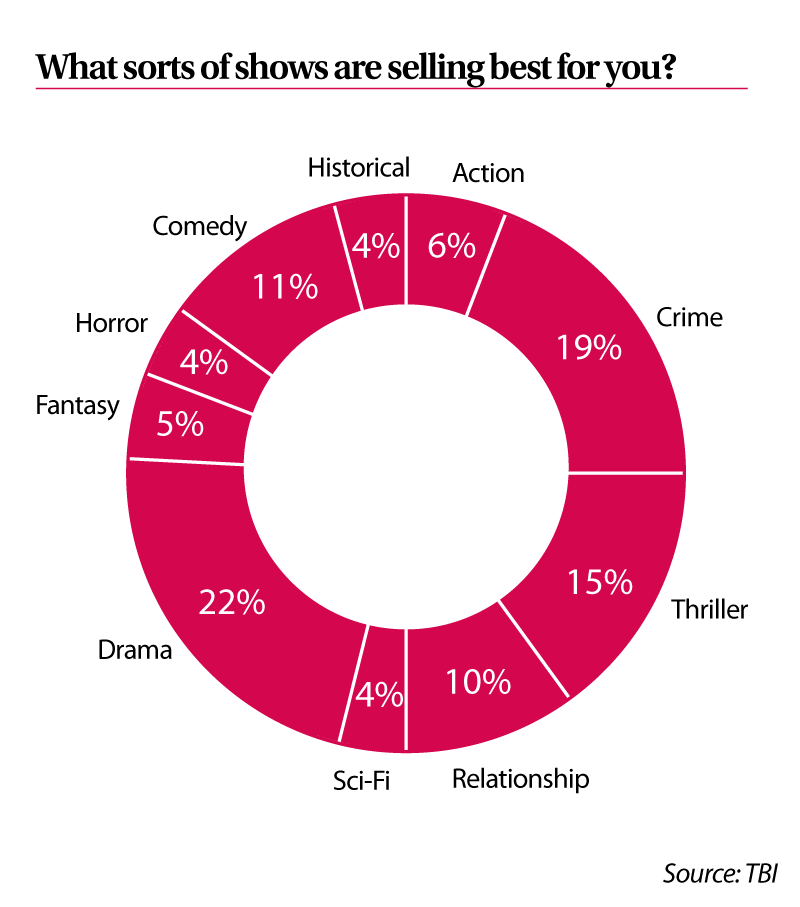 Another area that looks set to dominate 2023 is the surge of FAST channels. At present mainly the preserve of North America, there are clear hopes that broader global appetite for ad-supported linear channels will fuel this emergent window with 71% of respondents putting FAST buyers among those expected to grow over the next 12 months. And despite the rapidly evolving nature of global streamers, almost 65% of distributors believe this category will also continue to grow over 2022/23, with local pay-TV and local public broadcasters languishing lower.

Geographically speaking, much of the demand will likely come from North America, which was the overwhelming answer from distributors when asked where they are seeing most business. Australia and India were also regularly cited as countries to watch as demand rises, with countries across Europe and Lat Am among others noted. 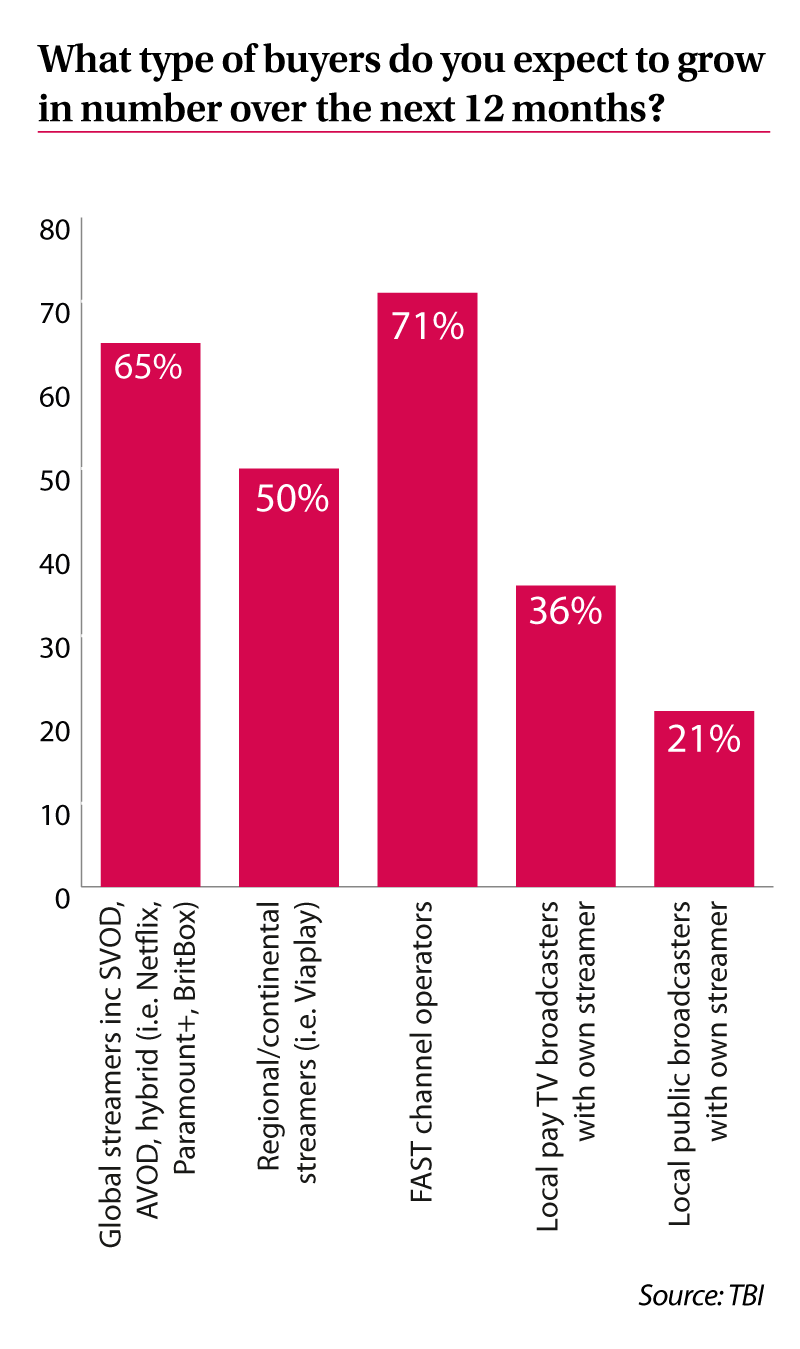 Looking further ahead and Stateside – and reflecting the somewhat uncertain nature of the market at present – only 35% of respondents said they expected US studios to make more product available to third-party buyers over the next 12 months.

And just where all this buying and selling might be happening is also unclear. MIPCOM was the stand-out winner on the event front with 85% considering it must-attend, while MIPTV stood at 41%. NATPE’s upcoming event in the Bahamas (formerly in Miami) is also proving popular with 55% preparing to attend. Others in the diaries include Conecta Fiction, Edinburgh TV Festival and the Berlin International Film Festival, among numerous others.

Dialling further into travel plans, the breakdown of companies expecting to attend more physical events in 2023 compared with 2019 was around 28%, while 32% said they expected to attend a similar number. The remaining 40% said they would attend fewer events, underlining the ongoing transition that the industry is still navigating.