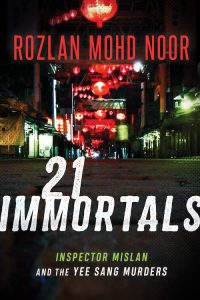 The Inspector Mislan novels are set in the Malaysian capital and follow the exploits of a tough street cop as he attempts to solve crimes while dealing with serious social issues and corruption in the ranks.

The 21 Immortals story opens on three carefully posed embalmed corpses – mother, father and son – who are all seated at a traditional Yee Sang feast, leaving the detective to work out what happened.

Michael Nakan, Envison’s chief content officer, said: “The Inspector Mislan character is perfect for television – he is a gritty, seemingly incorruptible Malay muslim street cop who brooks no opposition, from the criminal mafia or his superiors.”

Nakan said he planned to partner a Malaysian writer/filmmaker with a British scribe “in order to make high quality, authentic content which works for both local and global audiences.” David Barron (Harry Potter), director at Envision, discovered the Inspector Mislan series.

Noor served for 11 years as a crime investigator for the Royal Malaysia Police and a court prosecutor before joining the private sector. 21 Immortals is his first Inspector Mislan novel.