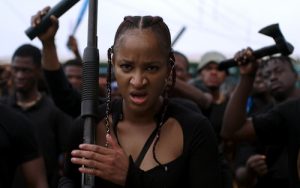 Amazon Prime Video is ramping up its activity in Nigeria, with a movie and unscripted series commissioned from producers in the country.

LOL: Last One Laughing Naija is a Nigerian remake of the well-travelled unscripted format, which sees local comedians competing to be the ‘Last One Laughing’. Livespot360 produces, with the show set to launch next year.

Gangs Of Lagos, meanwhile, is an action crime-thriller that follows a group of friends who each have to navigate destiny while growing up on the streets of Isale Eko, Lagos. The movie is being directed and produced by Jade Osiberu, produced by Kemi Lala Akindoju and co-produced by Akin Omotoso.

It will launch exclusively on Prime Video around the world later this year.

Amazon has been ramping up its local original form Nigeria recently, ordering an exclusive commissioning slate deal with Nemsia Films for three feature films, beginning with Breath of Life, launching next year. It also has licencing agreements with Nigerian production studios Inkblot Studios and Anthill Studios.

“From local payment and a full-scale local marketing campaign, to more local content specifically for Nigerian customers, our investment in Nigeria is a significant step towards our broader expansion plans in Africa and our ambition to be the most local of global streaming services,” he added.

Wangi Mba-Uzoukwu, head of Nigerian originals at Prime Video, added: “The news signals our continued commitment to the Nigerian TV and film industry, bringing the very best of authentic, homegrown stories to not only our customers in Nigeria, but also Prime Video members around the world.”