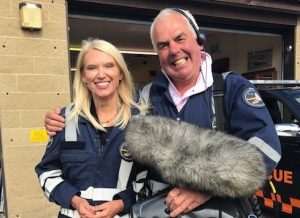 ITV Studios label Twofour and Kremplewood will produce the 4 x 60-minute reboot in which host Anneka Rice and her team tackle a wide range of challenges, helping out individuals and communities, and responding to the new set of problems that people are facing.

The series will shine the light on everyday heroes and deserving communities at a time when they’ve never needed help more. Across the course of the series, the team will meet a range of inspirational people who will help Rice move heaven and earth to achieve these challenges.

The host – alongside the also returning ‘Dave the Soundman’ – will head to secret locations to meet the individuals at the heart of the challenge and be briefed on the task at hand, calling in big favours from big brands, big names and big groups of volunteers all keen to help out.

Rice will exec produce, alongside Dan Adamson at Twofour, while Mark Wood and Blair Krempel will do so for Krempelwood.

The original Challenge Anneka series aired on BBC One from 1989 to 1995 and was followed by a brief revival with a series of specials on ITV from 2006-2007.

The format was sold to several countries, with adaptations including the Erin Brockovich-hosted Challenge America for ABC in the US.

Guy Davies, commissioning editor and VP of non-scripted UK originals for Channel 5 and Paramount+, said that there has “never been a better time to bring back such a loved series to our screens.” He added that: “The challenges promise to be timely, relevant and packed full of passionate and heart-warming people.”