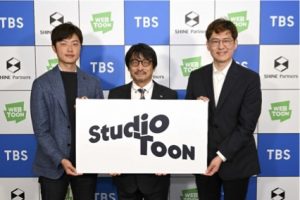 Studio TooN, which will be based in Korea, will develop original webtoons with Japanese and Korean creators, with shows then adapted into TV dramas, anime and other content for TBS. It is the first company launch for the Japanese broadcaster outside of its home country.

The new division, which is being launched with the support of Naver Webtoon, is set to launch later this month and is being headed by Keita Iwamoto, president of webtoon firm Shine Partners.

Kim Junkoo, CEO and founder of Naver Webtoon, added: “When webtoon works are visualised, there is a synergy effect as the number of readers increases. We are delighted to be partnering with TBS, Japan’s leading content production company. We look forward to working together to develop diverse webtoons even further.”

Webtoons originated in South Korea and are typically published in full colour, with content presented in a vertical, ribbon-like format, to be read by scrolling down, one panel at a time.

Japanese manga are typically published in black and white, and read horizontally from right to left, with several panels per page.