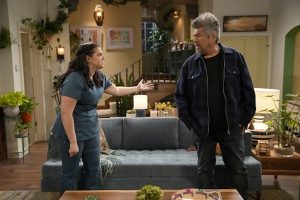 NBC has taken comedy Lopez vs Lopez to series, while sibling streamer Peacock has ordered a show from Borat Subsequent Moviefilm’s Jason Woliner.

Lopez vs Lopez is from the company’s Universal Television division, alongside Mohawk Productions, Travieso Productions, Mi Vida Loba and 3 Arts. The family comedy explores dysfunction, reconnection “and all the pain and joy in between”.

Peacock, meanwhile, has ordered an as-yet untitled project from Woliner that “mixes fact and fiction to tell a bizarre and incredible tale”.

Executive producers include Seth Rogen, who has a deal with Lionsgate, and US prodco Caviar. The show follows “a complex man on a remarkable journey,” said Lisa Katz, president scripted content, NBCUniversal Television and Streaming.

Woliner directed Borat Subsequent Moviefilm and has also been behind What We Do In The Shadows and The Last Man On Earth, among others.

US network E! is expanding its scripted offering with new romantic comedy shows in the works, as well as unscripted series, including one from Starstruck outfit Avalon.

The scripted shift will focus on TV movies, with six set to premiere early next year. E! said it “will put its signature spin on the rom-com genre, with inclusive feel-good stories and characters that are reflective of today’s society.”

Further details have not been revealed, but the network has confirmed details on a raft of unscripted shows, including Anthony Anderson And Mom: European Vacation (w/t).

It follows a man who takes his mother on a six-week tour of Europe, with Avalon producing. Jamie Isaacs, David Martin, Anthony Anderson, E. Brian Dobbins and Doris Bowman serve as executive producers.

Other shows on the slate include Black Pop, Celebrity Beef and Love Limo, as well as Raising A F***ing Star, which is from World of Wonder.

The deal, struck via Madrid-based agency Scenic Rights, will explore how two brothers created a video game empire from their parents’ house in 1980s Spain.

Javier Olivares (The Ministry Of Time) will be showrunner, working together with co-writers Pablo Lara and Bruno Teixidor.