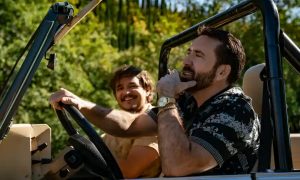 The Unbearable Weight of Massive Talent

Roku has signed a major content deal with Lionsgate to fuel its AVOD platform The Roku Channel.

The multi-year theatrical output deal will see Lionsgate films beginning with the studio’s 2022 theatrical releases make their way to The Roku Channel following their first window on Starz.

The agreement includes titles such as upcoming releases John Wick 4, Borderlands, Expendables 4 and The Unbearable Weight of Massive Talent.

Rob Holmes, VP of programming at Roku, said the “innovative approach creates value for both parties, and most importantly provides the millions of streamers on The Roku Channel with the opportunity to enjoy these compelling titles via this unique window.”

The trio will become available via The Roku Channel, which earlier this month commissioned Honest Renovations, which is being hosted and executive produced by Jessica Alba and Lizzy Mathis.