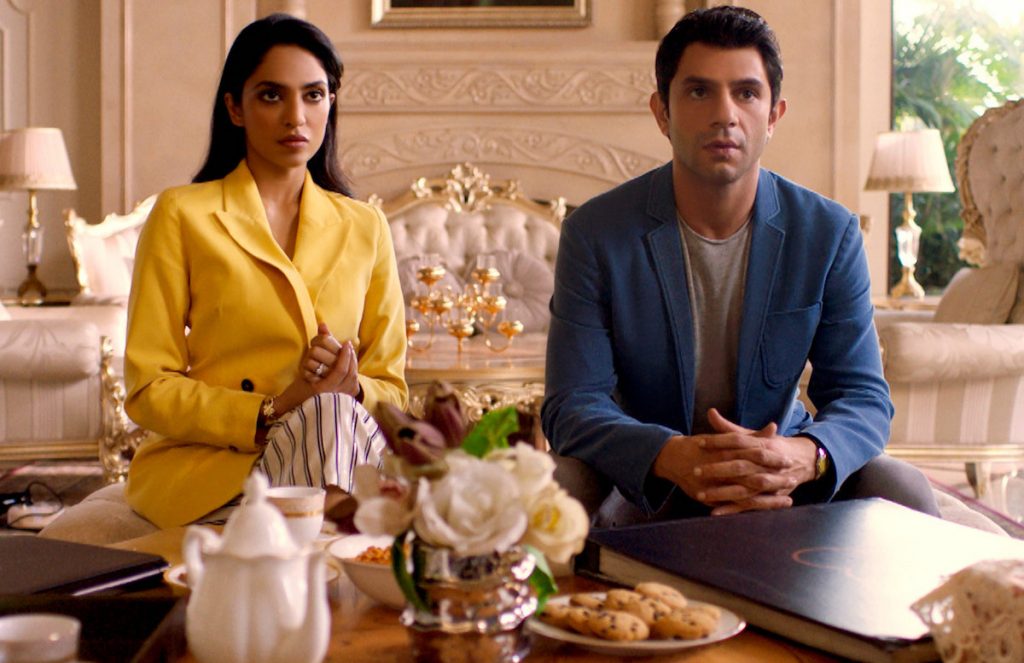 India’s SVOD subscriber numbers soared by more than a third in 2021 to reach 73 million and content investment is similarly surging – the country is second only to the US in content investment for Amazon. Research powerhouse Omdia unpacks what’s next for this vast OTT opportunity.

India’s online video market is the second-largest in Asia & Oceania after China and provides a wealth of opportunity for operators both inside and outside of its border.

Total TV and video subscriptions in the country reached 246 million by the end of 2021 and are set to grow to 300 million by 2025, with Covid-19 pandemic acting a great accelerator that has boosted the growth of an already very dynamic market. 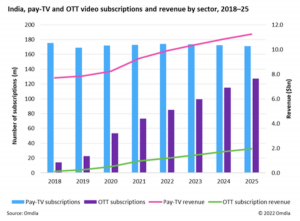 OTT video revenue showed even more impressive growth – from $500m in 2020 to around $900m in 2021 – but pay TV also remains an important part of the video sector in India.

Revenue from this sector accounts for 90% of total pay-TV and online video subscription revenue, with $9.3bn in 2021, with leading players including Tata Sky, Airtel Digital, Dish TV, Hathway Datacom, and DEN Networks. Cable in India has, however, been on a declining trend since 2019 but it has retained the leading position in pay-TV subscriptions over satellite.

The largest online video player in terms of subscriber numbers was Disney+ Hotstar, followed by Amazon Prime Video and Netflix.

There is growing pressure from others though, with notable local online video services such as Sony LIV, ZEE5, Eros Now and ALT Balaji. The current overcrowding of the market means consolidation in this sector is inevitable. Omdia expects merger and acquisition (M&A) activity among local players in the coming years as the market continues to develop. 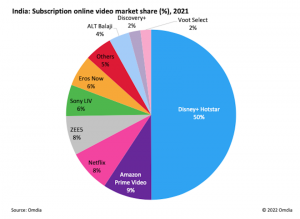 Underlining this overcrowding is the fact that in 2021, India hosted more than 55 OTT video services. Since 2016, when Jio slashed mobile broadband pricing by 70%, India has offered one of the most fertile environments for the growth of online video.

Content producers (mostly film and series production houses), both national and regional, controlled more than 40% of OTT services in 2021. Broadcasters, again both regional and national, controlled one in five OTT services, while pay-TV operators (satellite and cable) own only 1 in every 10 OTT video services.

Digital tech companies – such as e-commerce and cloud-computing firms – also control 1 in every 10 OTT services, but a slightly larger ownership share (11%) is taken by the global OTT streamers (such as Netflix, Amazon Prime Video, Disney, Lionsgate, Discovery, and others).

For the last five years, analysts have predicted a wave of mergers and acquisitions that they expected to considerably resize the market. However, new OTT services are launched every year, most of them regional or niche in 2021. Omdia does, however, anticipate merger and acquisition activity in the coming years. 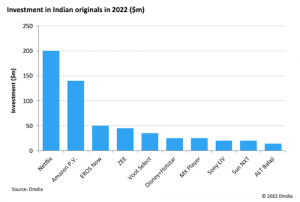 For all online video services, global and national, staying afloat in the competitive environment of the Indian OTT market is a delicate exercise. As content remains the primary differentiator between services, investment in original content takes centre stage.

Since 2017, when Netflix and Amazon produced their first Indian originals, all players in that market have been looking at upping their investments in Indian original content.

Omdia estimates that close to half a billion US dollars were invested in Indian original content in 2021. Investment has been growing significantly since 2017, with only 2020 experiencing a decline due to COVID.

The 200 lockdowns in 2Q21 had a much smaller impact than in 2020 because the industry was much better prepared; productions shifted to areas with no restrictions, such as Goa or even to neighbouring countries such as Bangladesh.

Two other reasons for the big growth in spending in 2021, relative to 2020, were the higher talent costs, as many Bollywood stars turned to OTT as a result of the closure of cinemas; and the top Indian media houses, such as Sony, Viacom 18, and Disney-owned STAR, revamping their content strategy, focusing on originals.

Netflix was, for the fifth year in a row, the largest investor in Indian original content, spending around $200m, followed by Amazon Prime Video with around $140m.

For Amazon, India is second only to the US in the amount of originals produced and in content investment, with shows such as Made In Heaven among its most high profile commissions. Among the Indian OTT services, EROS Now (a joint venture of EROS Ltd and US producer STX Entertainment, now owned by Najafi Companies) tops the list.

However, the country’s major broadcasters are determined to expand the footprint of their OTT services and to enrich their original content offering. ZEE, SONY, Viacom 18, and, lately, Disney-Star India are stepping up their investments to compete with the US giants.