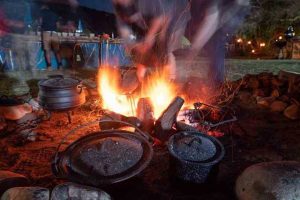 Trace is a “global afro-urban platform for youth entertainment and empowerment,” and Media Ranch will represent its formats internationally.

Among its formats are 2 Weddings & A Superstar, a reality “emo-tainment” property that sees some of South Africa’s greatest musicians surprise two of their biggest fans on the biggest day of their lives, with a performance of a lifetime.

Described as the “ultimate feel-good lifestyle property” the series follows love stories captured over three days leading up their weddings, building up to a romantic surprise of a lifetime – a live performance by their favourite South African superstar.

Ultimate Braai Master is a reality-based weekly series which sees nine teams compete across various outdoor cooking ‘braaing’ (barbequing) contests, where the weakest teams go into an elimination challenge, with the possibility that one team, may be sent home. Trace has produced and aired seven seasons, which are available on Netflix, and is in development for season eight.

The firm’s paper formats meanwhile include Any Objections, a reality series that focuses not only on a couple’s perfect wedding day, but also on unpacking the complicated family dynamics that occur when two people who decide to tie the knot. The 13-part series follows couples whose wedding plans have ground to a screeching halt at the last moment because a disgruntled family member has not approved of their union.

Trendsetters is a lifestyle reality television show which aims to turn obscure social media superstars into real world trendsetters, exploring what would happen if obscure insta-famous stars were placed them under the watchful eye of East Africa’s viewing public.

“After expanding in Asia recently, we now add South Africa for the first time. As we do with DR (Danish Broadcasting), we are taking Trace’s great formats out to the world.  We are grateful that Sivan and his team have entrusted us with their fantastic IP, and we expect very positive responses from our buyers,” commented Sophie Ferron, Media Ranch president and founder.

Sivan Pillay, CEO of Trace Studios added: “Having a partner like Media Ranch represent Trace Studios formats globally is an exciting first for us. We look forward to a long term mutually beneficial relationship where we can break new ground and continue in our pursuit to create more opportunities for African based IP.”