TBI Tech & Analysis: Netflix & the globalisation of the local

Netflix has become a dominant global force with commissioning hubs around the world, but how will its local content strategy evolve, asks Omdia’s Rob Gallagher

Is Netflix a trusted local content partner or just another globalising US media firm? This question has become increasingly relevant since I posed it in 2017; Omdia analysis of viewing data from PlumResearch suggests fresh answers.

The US market’s large population and wealth has enabled producers and platforms to fund and export content and services at unrivalled expense and scale. Despite the globalising forces of the internet and economic growth, the country still accounts for $267bn or 43% of total TV, online video and cinema revenues.

Netflix has provided a new twist on this dynamic by popularising and dominating subscription online video. Available in an unprecedented 200 markets, its service has captured 18% of online video subscriptions and 36% of revenues worldwide, according to Omdia. Outside of China, where Netflix is not officially available, its share is 26% and 40%, respectively.

Netflix will need to invest more in local content in Asia Pacific and other markets with less cultural affinity with the US, especially as it runs out of new subscribers in Western markets

Netflix’s success has also spurred Amazon, Apple, Disney, Paramount and Warner Bros. Discovery to launch their own global subscription video offers. By 2025, Omdia forecasts these US companies and Netflix will account for 42% of subscriptions and 50% revenues worldwide, and 61% and 55%, excluding China.

As Netflix’s success has grown, so have questions about its ultimate impact on media & entertainment outside of the US.

For local media firms, the US company could be a partner or competitor – or both – depending on what roles they play in the increasingly blurred TV, movie and video value chain. Regulators and policymakers are considering how Netflix might help or hinder their nation’s creative economies and cultural “soft power” gained through the export of their content.

For other US media giants and local players with international ambitions, Netflix’s example may serve as a playbook for global expansion and ultimately securing a seat on tomorrow’s M&E industry leaderboard.

Five years ago, when I asked what impact Netflix would have on local content, I compared the share of native languages of the global population and Netflix’s forecast subscriber base. At the time, only 5-11% of people spoke English as a first or second language, yet our forecasts suggested 61% of Netflix subscribers would be from English-speaking countries even in 2021. 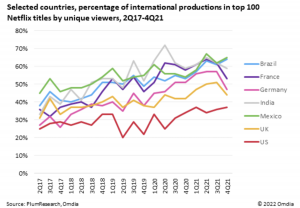 I concluded that Netflix would make impressive – but essentially limited – investments in local content. While it would increasingly turn to talent outside the US to attract and engage local audiences, it would only invest just enough on a country-by-country or culture-by-culture basis to keep subscribers paying their relatively small monthly fees.

Despite the Netflix’s success with Squid Game and Money Heist and multi-million dollar commitments to local production facilities and funds, I think this conclusion is still broadly correct. Omdia’s analysis of Netflix viewing figures from our data partner PlumResearch throws new light on what will count as “just enough” investment and why.

International content is growing in popularity across all the 37 mid-to-large-sized markets PlumResearch supplied data for – including the US. For the top 100 titles by unique viewers in Netflix’s domestic market, the percentage of those that involved non-US countries rose from 25% in 3Q17 to 37% in 4Q21. In India, that percentage reached a high of 72% in 2Q20.

Titles produced entirely outside of the US are less popular in countries with close ties to the US, such as Australia, Canada, Ireland, Mexico and the UK. But in continental Europe and Latin America, they regularly accounted for more than 30% of top titles and around 50% in Asia Pacific.

Tastes in kinds of international content also varies by market. In South Korea and Japan, homegrown titles made up 63% and 40% of their respective top 20 rankings in 4Q21. In Germany, France and Italy, in contrast, local productions tend to account for 5-10% and other non-US ones around 40-45.

To answer my original question: the picture remains mixed, but more nuance is emerging.

Netflix will need to invest more in local content in Asia Pacific and other markets with less cultural affinity with the US, especially as it runs out of new subscribers in Western markets. It’s also clear that Netflix can attract and keep subscribers worldwide happy by funding and promoting international titles with global appeal.

But its investments will remain small relative to the size of local populations, economies and cultures. And while media firms should promote diversity and inclusion, that responsibility shouldn’t sit on Netflix’s shoulders alone. It’s now time for other US giants, local media firms and governments to study its remarkable example to see how they can help globalize the local for the world’s benefit.

Rob Gallagher is VP of research for media & entertainment at global research powerhouse Omdia. Like TBI, Omdia is part of Informa. For more in-depth data and analysis of content strategies, click here.