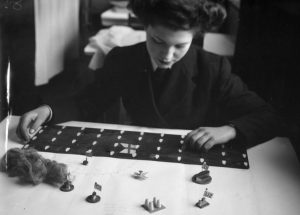 Curiosity Stream and Germany’s ZDF Enterprises (ZDFE) have linked up on a six-part docuseries exploring how a group of young women defeated the Nazis’ attempts to sink Allied boats during the Second World War.

War Gamers (6 x 50 minutes) is being produced by World Media Rights in association with coproducer ZDFE and Curiosity Stream, where the show will debut later this year.

It explores how the Royal Navy staffed up a war gaming school with a team of women – all members of the Women’s Royal Naval Service (WRENS) and most in their 20’s – who went on to unpick the Nazis’ tactics at sea, which were threatening to cut off the UK’s vital supply roots from the US.

Together, the WRENS not only determined how German U-boats managed to sink so many British and American ships, but also came up with a strategy to defeat them. This was put into effect in May 1943 against the largest fleet of U-boats ever assembled to attack a convoy, which saw heavy German losses amidst a battle that stretched from Iceland to the mid-Atlantic.

The six-part series begins filming this month and will be sold in select international markets by ZDFE.

Ralf Rueckauer, VP of ZDFE.unscripted, said: “History provides a never-ending supply of intriguing stories. War Gamers celebrates the extraordinary skill and genius of the women, recruited by the British Royal Navy, who played a crucial role in ending Hitler’s dominance in the Atlantic.”