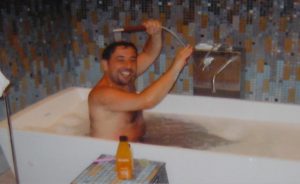 Big Breakfast, the Propagate-owned production company behind shows such as truTV’s Adam Ruins Everything, is rejigging its senior leadership.

Jason Schrift, the veteran TV executive and producer who helped to launch and served as co-exec producer of Jimmy Kimmel Live!, has been named president, while former president Luke Kelly-Clyne and CCO Kevin Healey are exiting the company.

Schrift currently serves on the Advisory Board for Brooklyn Sports and Entertainment, which comprises the Barclays Center and the NBA’s Brooklyn Nets. He spent 15 years on Jimmy Kimmel’s hit late night ABC talk show, before leaving in 2018.

His other credits include HBO’s Shangri-La With Rick Rubin, ESPN sports interview series Homecoming With Rick Reilly, The Alec Baldwin Show for ABC, and an untitled sitcom starring Baldwin and Kelsey Grammer that had been ordered by ABC before ultimately being passed on.

Schrift previously had an overall deal for scripted and unscripted television with NBC/Universal.

Kelly-Clyne had served as president since November 2019, having previously been the showrunner and executive producer of Netflix and Pop show Hot Date. Healey was appointed as CCO in September 2019, joining from Propagate where he had been SVP of alternative comedy and formats. He recently joined Kevin Hart’s firm Hartbeat.

The company said that the duo would depart “as part of the reorganization of the business unit as Propagate looks to expand its prescience across all elements of comedy from events to series to digital.”

“We are thrilled to bring Jason into the Propagate tent as president of Big Breakfast,” commented Propagate chairman and co-CEO Ben Silverman and co-CEO Howard T. Owens. “Jason is responsible for some of the funniest moments on television as an executive producer of Jimmy Kimmel Live!, and his comedic voice will further elevate the Big Breakfast brand.”