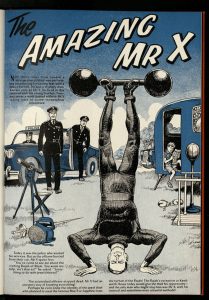 UK publishers Beano Studios and DC Thomson have launched Emanata Studios to develop TV and film projects around classic British comic characters from titles including The Beano, The Dandy and Commando.

The companies, which are behind brands such as Dennis The Menace and Bananaman, have already struck US deals with Westbrook Studios, Jerry Bruckheimer TV and Fox Entertainment, as well as in the UK with the likes of Sky and UKTV.

Chief Creative Officer Mark Talbot will lead Emanata Studios, which will draw upon other titles such as Victor, Jackie, Bunty, Hotspur, Spellbound and Mandy. Talbot will work alongside a team of producers and he will continue to report into Beano Studios chairman James Clayton and CEO David Guppy.

Emanata Studios will have offices in both Dundee, home of the comic archive, and London, and is represented in the US by CAA.

In the US, Emanata will work with Will Smith and Jada Pinkett Smith’s Westbrook on a drama based on the very first British comic book superhero The Amazing Mr X, who is featured in The Dandy.

The nascent company also has a live action dramedy based on Dennis The Menace in development with Jerry Bruckheimer TV and CBS Productions, while Fox Entertainment has picked up the rights for Bananaman and is developing an adult animation series with Bob’s Burgers creator Bento Box.

Emanata has also struck deals in the UK, with UKTV commissioning a comedy live action pilot script based on an iconic comic character from The Dandy.

Screen Scotland, backed by the Scottish Government and The National Lottery, has funded a drama, written by Rae Brunton, based on the character Nick Jolly the Flying Highway Man, who featured in the Hotspur comic.

Live action dramas are also in development with both Sky Studios and Drama Republic, as well as two adult animations with MTV Entertainment Group.

Talbot commented: “This is an incredibly unique place to be. This one-of-a-kind archive has preserved more than 2,000 stories and characters and Emanata is the perfect studio to reawaken them. For those who already know them, and new audiences ready to be entertained, we can’t wait to reintroduce the world to Bunty, The Supercats, Nick Jolly The Flying Highway Man alongside the incredible Beano IP at our disposal.”