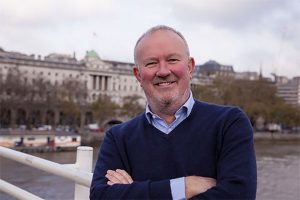 David Frank had worked in TV for more than three decades, most recently running London-based distribution firm Rocket Rights as chairman, with his brother Matthew in the role of CEO.

David Frank had initially started out in the TV business as a reporter for the BBC in the late 1980s before launching RDF Media Group in 1993.

His brother Matthew joined the company a year after its formation and the duo grew it into a global operator, which they eventually sold to De Agostini for £150m in 2010, when it became part of Zodiak Media.

David Frank stayed on as CEO at the newly enlarged Zodiak, expanding the company around the world, before departing in 2013. He and brother Matthew subsequently set up Dial Square 86, from where they launched online distributor TRX in late 2019.

After stepping back from that business last year, the duo formally unveiled Rocket Rights in January, with a view to working with producers around the world as a “next generation, multi-genre distributor”.

He is understood to have passed away suddenly while at home over the weekend, and is survived by his wife Isabelle and his three children.