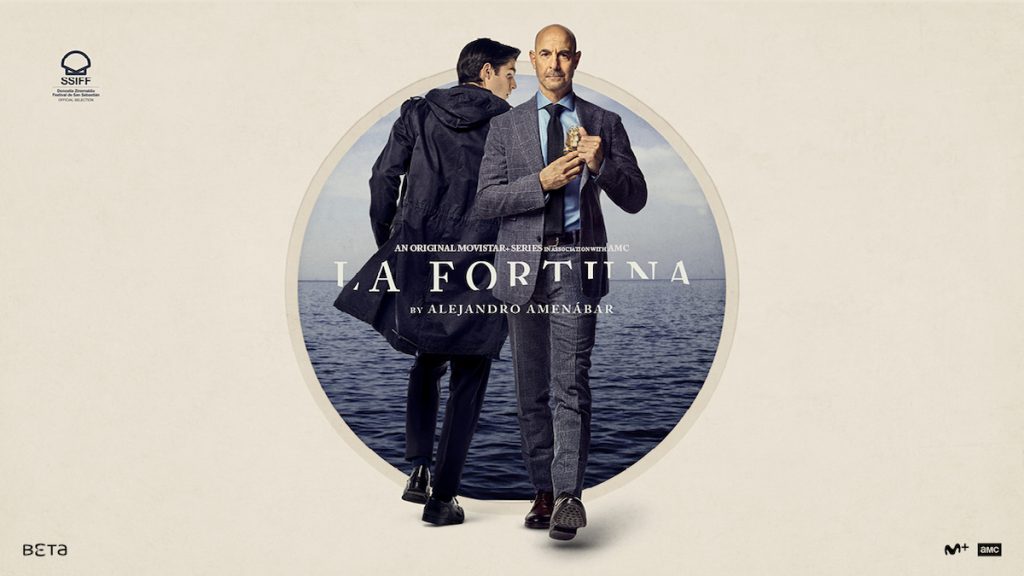 This David versus Goliath battle, based on a true story, is from acclaimed director Alejandro Amenábar and stars Stanley Tucci as a modern-day pirate willing to go to any lengths to secure an unprecedented haul of treasure.

Set in the deep waters off the Southern Spanish coast, La Fortuna offers an enthralling dramatisation of an almost unbelievable battle of wills involving a modern day pirate and a government minister defending his country.

At the centre of the show is Captain Frank Wild, played by Stanley Tucci, and his team of buccaneers who have discovered the largest ever haul of underwater treasure.

On the opposite side is Alex Ventura, on his first day on the job at Spain’s Ministry of Culture, who must navigate international relationships while proving that La Fortuna and its booty sank in Spanish waters – and that Wild has no claim.

The story tracks Ventura as he teams up with free-spirited archival clerk Lucia and Jonas Pierce, a brilliant American lawyer with a passion for old pirate stories, as they set out on an adventure that explores values of commitment, friendship and even love.

“Alex and Lucia, besides being each other’s obstacles in a fun and entertaining way, fight a David against Goliath battle on a personal and public level,” explains Andreas Khevenhüller-Metsch, Beta Film’s VP of international sales & acquisitions.

The premise enticed AMC and Oscar-winning director Alejandro Amenábar early on, Khevenhüller-Metsch says, and provided the show with access to the highest per-episode budget in Movistar and Beta’s joint history.

“Alex and Lucia are the classic odd couple, so they have to find a way not only to get along but to bring out the best in each other,” explains Khevenhüller-Metsch. “On the plot level, they have to retrieve the biggest sunken treasure ever found from the last modern-day pirate, Frank Wild who, played by Stanley Tucci, isn’t about to give it back.

“But before they even get close, they have to locate the wreck themselves in a needle-in-a-haystack type search. Then they have to convince a whole armada of nay-sayers in Spain’s political ranks. While the ticking clock counts down relentlessly, they still lack the proof to even make their case.”

Khevenhüller-Metsch admits it is hard to believe the ownership battle occurred so recently – in 2007 – while Beta’s Peter Lohner, VP of acquisitions Hispanic & international, says the cast and director ensure the show never seems “superficial”.

“Amenábar undoubtedly brings out the hidden depths of each main and supporting character of what is a completely enjoyable, fun action adventure drama. Much the same can be said about Stanley Tucci’s portrayal of Frank Wild. Tucci brings out much more than just the ‘last modern-day buccaneer’ in Frank, but also the truly loving father of a daughter following in his footsteps as well as the gravitas of the whole mission and its loot, which is not just a treasure but an icon of national identity.”

Producer: Movistar+ with AMC Studios and in collaboration with MOD Pictures
Broadcaster: Movistar+
Distributor: Beta Film
Synopsis: A David and Goliath battle involving a highly unlikely couple, replete with unexpected setbacks, face-offs and revelations, as they take on not only the last modern pirate but also the seemingly insurmountable forces behind him.