Streaming subscriptions to triple in Africa over next five years 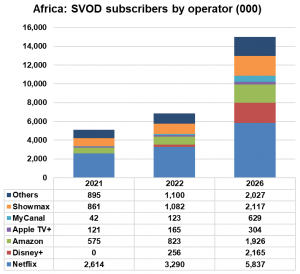 The number of streaming subscriptions in Africa is set to triple over the next five years.

According to Digital TV Research, the region will reach 15.06 million paying SVOD subscriptions in Africa by 2026, triple the 5.11 million expected at the end of 2021.

Of that 10 million new subscriptions, South Africa and Nigeria will each supply 2.3 million. These will be the only two countries with more than 1 million subscriptions.

Netflix is set to continue its domination in the market, though its market share will drastically shrink from 51% in 2021 to 39% in 2026. This is despite Netflix doubling its subscriber total from 2.61 million in 2021 to 5.84 million in five years time.

Showmax will be the third largest player, expanding from an existing base of 861,000 subscribers to 2.12 million over the forecast period, while Amazon will expand its 575,000 subs to 1.93 million. Regional player MyCanal will see significant growth from 42,000 to 629,000.

Simon Murray, Principal Analyst at Digital TV Research, said: “The selective launch plans from some global platforms works in favor of regional players such as Showmax and MyCanal.”