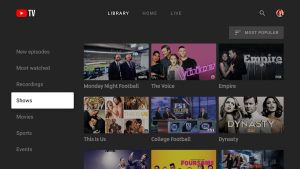 The oft-requested features are a part of YouTube TV’s new 4K Plus add-on, which will cost users an additional $19.99 per month. YouTube is running a promotion for early adopters who will get the bolt-on for $9.99 per month for the first year.

The add-on also enables ‘unlimited’ concurrent streams for any device on a user’s home network, whereas that would normally be restricted to three devices. The limit still applies for devices outside of the home.

In a blog post, the company touted the availability of major sports in 4K from networks including NBC and ESPN, along with on-demand content in higher fidelity from FX, Discovery Networks and Tastemade.

Critics have noted that the cost of the add-on, which includes some features like 4K that are offered by rivals for no additional cost, effectively negates the purpose of the service, which has a starting subscription cost of $64.99 per month.

Services like YouTube TV and Hulu + Live TV were initially pitched as cheaper alternatives to expensive cable packages in the US, but with this addition making the former cost closer to $100 than $50, questions of value may begin to emerge.