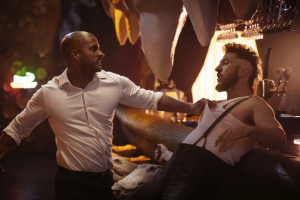 US network Starz has cancelled fantasy drama American Gods, confirming that the series, based on the novel by British author Neil Gaiman, will not return for a fourth season.

The cancellation leaves the show on a cliffhanger, having still some way to go to reach the events at the climax of the novel.

Star Ricky Whittle took to social media to share that he was “still committed” to finish the story.

“This has been an amazing journey thus far and I am so grateful to my fellow cast and crew who have worked so hard on this award winning show. We have the best fans around the world and thank each of you for your passion and support, so know that Neil Gaiman, Fremantle myself and the cast are still committed to completing Neil Gaiman’s critically acclaimed story,” wrote Whittle.

Fox seeks ‘Our Kind Of People’

The series, titled Our Kind Of People, has been created by writer and exec producer Karin Gist and exec producer Lee Daniels and will be co-produced by Fox Entertainment and 20th Television. Set in the aspirational world of Oak Bluffs on Martha’s Vineyard, it follows single mom Angela Vaughn as she sets out to reclaim her family’s name.

“Our Kind Of People is a soapy, thrilling exploration of race and class in America and an unapologetic celebration of black resilience and achievement – all daringly told by a team we’ve been eager to get back in business with,” said Michael Thorn, president of entertainment for Fox Entertainment.

The 1 x 90-minute film is set to debut on UK broadcaster Channel 4 later this year, exploring the story of British socialite Maxwell, who is facing trial for her role in the Jeffrey Epstein scandal.

Rachel Job, SVP, of non-scripted at All3Media International, commented, “ The Roast Beef team has already delivered some of the most gripping films in the non-fiction genre in recent years, and this latest production, with its eminent line-up of creatives behind the camera, promises further compelling, excellent television.  It will deliver the truth behind the verdict – and will be responsive and reactive to the trial process.”